Kyla Wilson signed to play volleyball at Judson College in Marion during a ceremony on the stage in the Jemison High School auditorium on May 8.

“I’m blessed for this opportunity,” Wilson said. “I couldn’t have made it without God and my family and friends supporting me.”

She started playing volleyball as a sophomore in high school after initially trying out for the squad but missing the cut as a seventh grader.

“I’ve felt myself evolve as a teammate and a leader,” Wilson said.

Although Wilson had not been playing the game competitively as long as some of her teammates, she showed a knack to learn quickly and adapt to the game’s nuances on the go.

“I don’t think she realizes how good she is, was or can be,” Jemison head coach Stephanie Bolling said. “She’s not going to settle for OK.”

Over the past couple of years, Wilson has proven to be a natural fit as a volleyball player. She showcased that yet again by winning over the Judson coaching staff during her tryout. 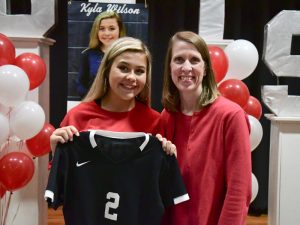 Wilson will be putting on a Judson jersey during her college career. (Photo by Anthony Richards)

According to Bolling, one thing that the Judson coaching staff will not have to worry about is Wilson’s work ethic and the time she puts forth toward honing her craft.

“She’s her own worst critic,” Bolling said. “She’s always questioning what she can do to make things better. That’s just going to make a player stronger.”

Wilson thanked Bolling for helping prepare her for the opportunity to take the court at the college level.

According to Wilson, Bolling was one of the first people she called when spreading the news that she got a tryout with Judson.

“We were both crying over the phone, and she was telling me how proud she was,” Wilson said. “I definitely couldn’t have done it without her.”

Wilson played middle blocker for the Panthers and will most likely continue that at the next level.

“There are some individuals out there that are a so-called fit for a sport,” Bolling said. “I think she’s realized that volleyball is her fit.”

Jessica Paschal’s memory lives on in the form of a scholarship that was recently created by the family in association... read more