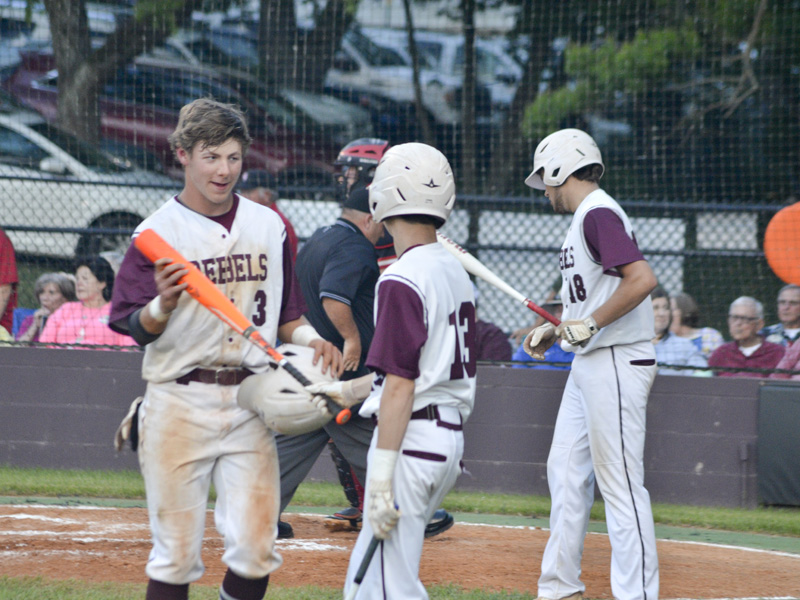 The Thorsby batting order got off to a quick start with a six-run first inning in Game 2 of the Class 2A state semifinals against G.W. Long. (Photo by Anthony Richards)

Thorsby baseball’s 2019 season came to an end after losing in three games to two-time defending 2A champion G.W. Long on May 9.

It was series full of shifting momentum for both teams.

Thorsby dropped Game 1 9-0 and the lineup only managed four hits in the process. One of those hits was a double by Jacob Lockhart.

However, Lockhart later had to leave the game after getting hit by a foul ball that found its way in the THS dugout.

He suffered a cut above one of his eyebrows and went to the emergency room to get stitched up and stop the bleeding.

The Rebels wrapped up the contest and began Game 2 without their starting center fielder and leadoff batter.

“It was very unexpected,” Lockhart said. “When I was getting stitched up I was following the game on GameChanger.”

Thorsby’s offense wasted no time finding the scoreboard in Game 2 with six runs in the first inning as they batted around the order.

“A big difference was being on the road last year,” Tyler Jackson said. “The home field advantage here was crazy tonight.” 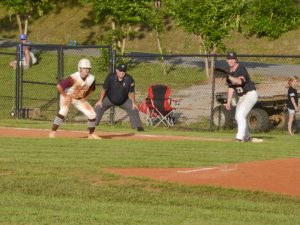 Thorsby senior Chase Birchfield gets a lead off first base. (Photo by Anthony Richards)

Tucker “Dale” Patterson drove in a run after being hit by a pitch, while Alex Brown, Chandler Stephens and Brody Barnett each had RBI singles.

According to Jackson, starting off Game 2 strong was very crucial, especially after getting shutout the previous game.

“It’s a lot easier to play with a six-run lead,” Jackson said. “Anybody in the lineup can get a hit at any time. That’s why we made it this far.”

G.W. Long hit a two-run homer and scored three runs of its own in the bottom half of the inning. The battle was on.

THS head coach Billy Jackson was tossed from the game the third inning. He had been in disagreement with the consistency of the strike zone.

Despite the intensity ratcheting up, Thorsby clung to a 6-5 lead after five innings thanks in large part to Lockhart, who returned from his emergency room visit and had re-entered earlier in the game.

He wound up gunning down a G.W. Long base runner trying for home to end the fifth inning. The out preserved the lead and the eventual victory, as Thorsby added some insurance runs and won 9-5.

“I honestly thought he’d be safe because he had a good jump on me [from third],” Lockhart said. “Tanner [Jones] made a good pick on it and tagged him perfectly.”

Patterson started the rubber match for Thorsby, which was a low-scoring affair for much of the contest.

However, Thorsby fell 5-1 after Game 3 was officially called in the bottom of the seventh inning due to inclement weather.