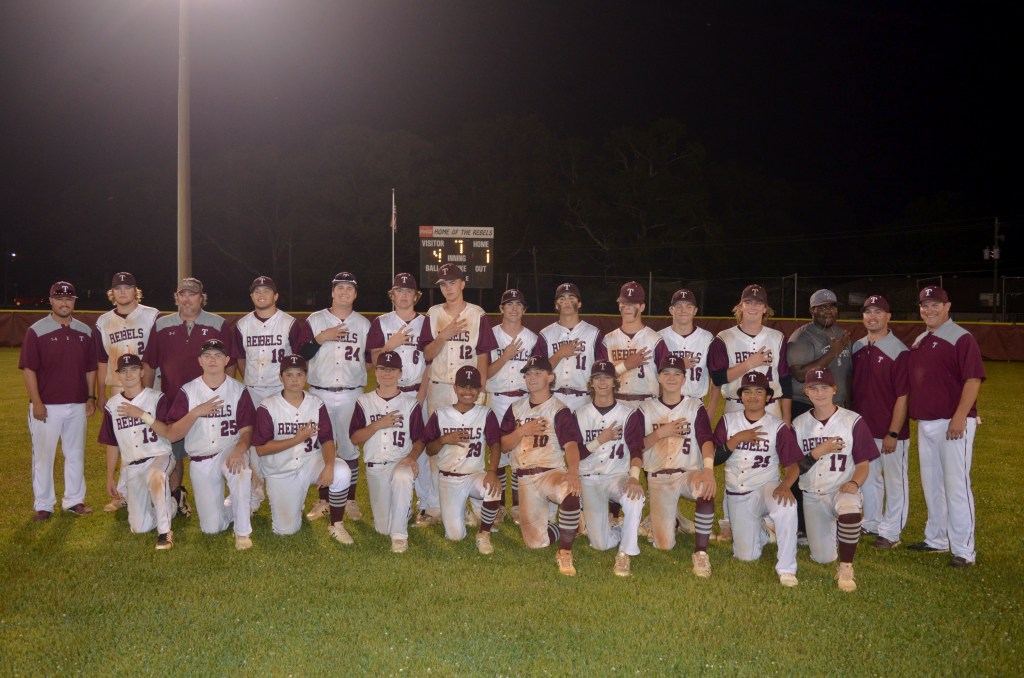 The Thorsby baseball team holds up four fingers to symbolize a second consecutive trip to the state semifinals in Class 2A. (Photo by Anthony Richards)

The state semifinals have become familiar territory for the Thorsby Rebels baseball team, who are among the final four teams in Class 2A following a sweep of Ariton on May 3.

Senior Alex Brown helped the Rebels punch their ticket to the semifinals with a pinch-hit RBI double with two outs that brought home the winning run in the sixth inning of Game 2.

“He deserved it, because he has always been the guy that stays late [after practice],” Thorsby head coach Billy Jackson said. “He’s played all his high school career, and that was his moment to shine. That made all those days worth it.”

Brown’s clutch at-bat broke up a 1-1 tie and spurred a huge eruption of applause from the Thorsby faithful in attendance.

Emotions were running high when Brown eventually got back to the dugout between innings and was congratulated by his teammates, while Jackson yelled out “that’s a heck of a job.”

“The outcome of the game was changed with that one at-bat,” Jackson said.

Jackson informed Brown a couple of innings prior to his at-bat that he would be called upon to pinch-hit.

Knowing this, Brown quickly grabbed a bat and spent time between innings taking practice swings in the bullpen.

“Coach has always told the seniors to come in and give the team a winning chance,” Brown said. “I’ve had that in my heart the entire year, and I just wanted the opportunity.” 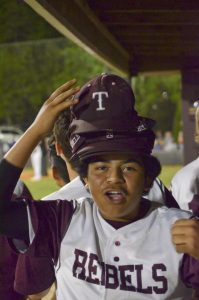 Cristobal Sanchez wears his teammates’ hats in an attempt to start a rally in Game 2. (Photo by Anthony Richards)

As he put on his helmet and stepped into the on-deck circle, there was a sense of purpose in his eyes. He appeared to be locked into the moment.

“I said a prayer,” Brown said. “When I hit it and saw it go over the shortstop’s glove, I knew I had done the job.”

Thorsby went on to score a couple more runs in the seventh inning to win 4-1, as Trent Jones locked down a complete-game performance.

Jones struck out nine Ariton batters on the night, including sitting down the side in order in the sixth inning.

In Game 1, the Rebels were down 2-1 early but continued to get runners on base and eventually grabbed the lead and opened up a cushion with a four-run fifth inning to win 7-2.

“We’ve got a lot of fight in this group,” senior Chase Birchfield said. “We’re not going to quit.”

Tucker Patterson smoked a solo shot to center field to give Thorsby a 3-2 lead in the fourth inning.

Jacob Lockhart, Cole Hight and Tyler Jackson each finished with a pair of hits in Game 1.

Thorsby combined to outhit Ariton 20-7 during the third-round series.

“I work on hitting every night,” Chandler Stephens said.

Tanner Jones pitched all seven innings in Game 1 and allowed just two runs on four hits while striking out 10.

The Rebels will host G.W. Long in a best-of-three semifinal series beginning at 4:30 p.m. on May 9. G.W. Long is the two-time defending 2A state champion.

“We’ve got our work cut out for us with those guys, but we’ve earned it just like they have,” Billy Jackson said. “We’ve got a good nucleus.”

Playing at home is a luxury Thorsby did not have in the semifinals a year ago.

“Anytime we play here [at home] we feel like we’ve got a chance,” Billy Jackson said.