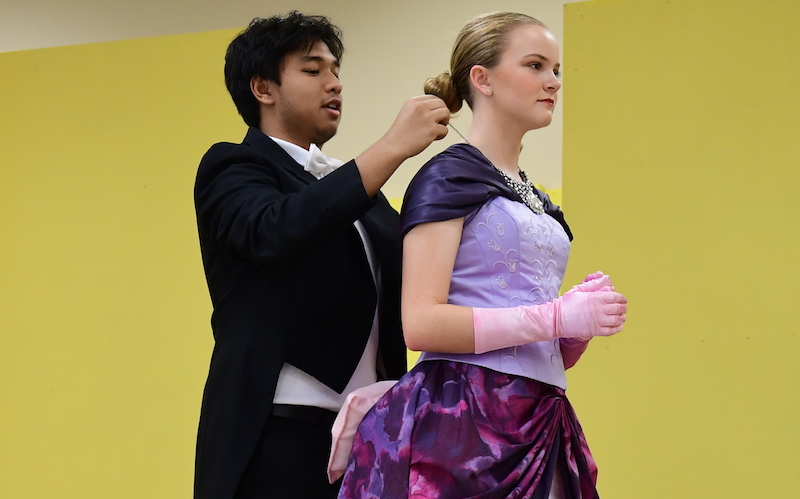 Central Alabama Performing Arts Guild actors practice for last year’s performance of “Play On.” Auditions for this year’s play will be on April 20. (FILE)

The Central Alabama Performing Arts Guild is holding auditions on April 20 from 1-3 p.m. at Grace Community Church for its summer production of “Death by Dessert.”

Director Sarah Jackson said those auditioning fill out a short application with their contact information, read from a script and are asked a few questions about why they want to participate. Anyone can audition for free.

Although prior experience is not required, Jackson said the Guild would like to know of any previous experience a person has.

“Some people have been in productions before, and (for) some people this is there first time,” Jackson said. “We had several first timers for ‘The Wizard of Oz,’ and it was outstanding.”

This opportunity is open to those 15 and older. However, those younger can be a part of the backstage crew.

Those auditioning will be asked if there is a particular part they are interested in reading for.

Jackson said this will be the Guild’s first murder mystery. She said the play is also a comedy.

The script was chosen out of several that Jackson and fellow Guild member Mary Schiermann reviewed.

“She found this one, and we fell in love with it,” Jackson said. “We thought it would be great for our first murder-mystery endeavor, and we hope it’s a huge success.”

The script calls for about 15 cast members with additional positions available for backstage crew members for set, lights, etc.

Jackson will also be looking for high school members to be a student director, stage manager and props manager.

“My student director will work beside me and learn the ropes of directing a play,” Jackson said.

Rehearsals for the July 27 production at Senior Connection will be Tuesday evenings 7-9 p.m. and Saturdays from 1-3 p.m. from April 27 to July 25.

The format will be dessert-theater style.

“We will have a dessert bar with coffee and tea,” Jackson said.