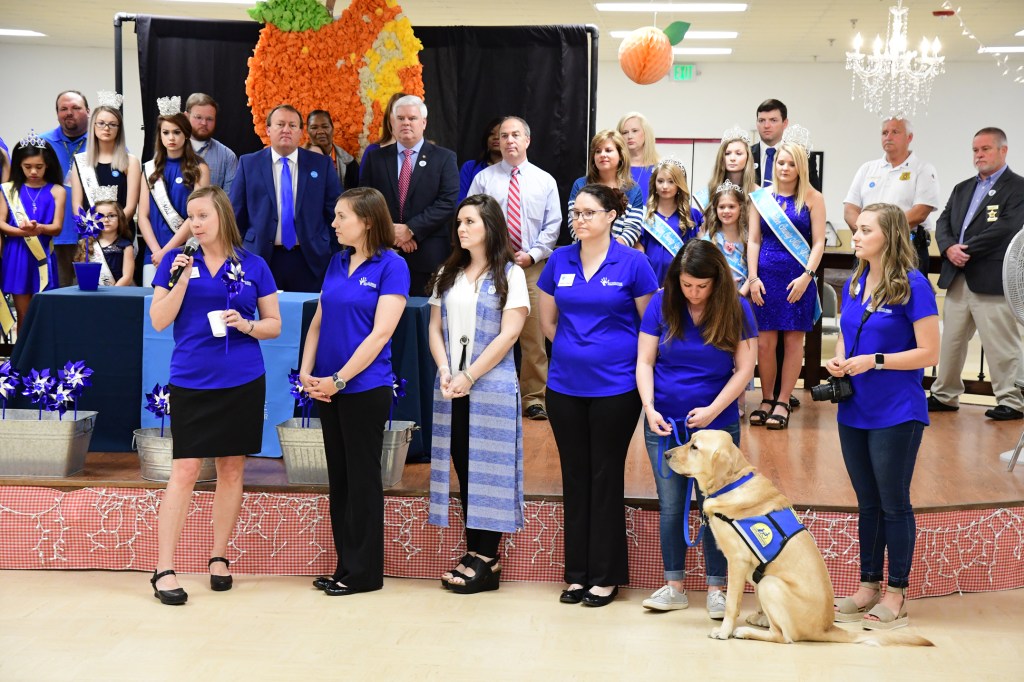 The event, dubbed Blue Ribbons and Biscuits, brought together different officials in Chilton County to raise awareness of their efforts to aid victims of child abuse and prevent it from occurring.

“April is recognized as National Child Abuse Prevention month,” Zuelzke said. “Every year in April we recognize that here in Chilton County. Today was about kicking off the month of activities and different things centered on children and protecting them. I was thrilled this morning that so many community members came out and that they are in tune and aware.”

A proclamation designating April as Child Abuse Awareness Month in Chilton County was signed by Calhoun and Speaks towards the end of the ceremony.

“Now, therefore be it resolved that I, Probate Judge Jason Calhoun, and District Judge Chris Speaks, do hereby proclaim April as Child Abuse Awareness Month in Chilton County in 2019 and call upon all citizens, community agencies, religious organizations, medical facilities and businesses to increase their participation in our efforts to prevent child abuse, thereby strengthening the communities in which we live,” Calhoun read before signing the proclamation.

Zuelzke said many people in Chilton County work together to both help prevent child abuse from occurring and aiding victims in the unfortunate event it does happen.

“What’s so awesome about this community is there are so many of us that work on the front line for these kids, and everyone works together,” she said. “It’s not a tug of war with any other agencies. We all work together because we’re putting the kids first. It is awesome for us at the advocacy center to have that community support.”

Zuelzke invites members of the Chilton County community to wear blue / blue ribbons, which symbolize child abuse awareness, on Fridays during the month of April in support of the cause.

“Blue is very important during this month,” she said. “Wearing blue, blue ribbons and pinwheels are all symbols for the month. We encourage our community members to wear blue every Friday of the month. That makes people more aware of the issue of child abuse, which does happen here in Chilton County more than they realize.”

Several of the speakers told those who gathered for the event about Zuelzke and Butterfly Bridge’s efforts and the job they believe they do. They also spoke highly of Chilton County DHR and its efforts.

“They have done a fantastic job over the years, and we are so proud of what they have done,” Maddox said. “The partnership between the judicial, DHR, Butterfly Bridge and law enforcement has just grown and grown since (Zuelzke has) been there. We are so thankful to have her. I don’t know what we’d do without her.      “

“I cannot tell y’all the importance of Butterfly Bridge and DHR and what they try to do to protect these children and get them to a better situation,” Speaks said. “If I could, I could stand up here and tell you story after story after story that would absolutely break your hearts — stories that I hear on a regular basis quite frankly. I am so thankful for these people up here and what they do.”