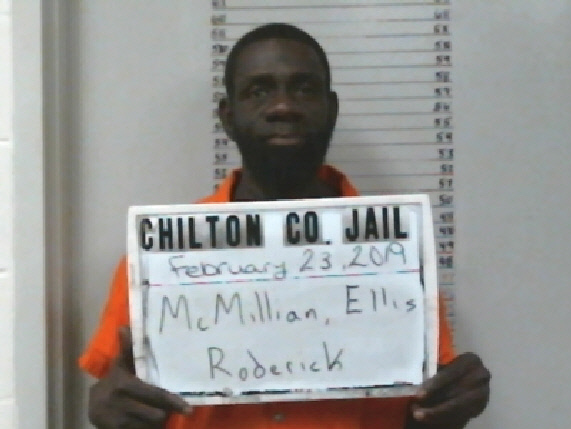 Ellis Roderick McMillan was arrested on Feb. 23 by the Clanton Police Department. He is believed to been the culprit in a robbery at Clearview Grocery. (CONTRIBUTED)

Clanton Police Department quickly captured a suspect believed to have been the culprit in a robbery at Clearview Grocery on Feb. 23, according to a release from the agency.

Ellis Roderick McMillan of Clanton, 42, was arrested by CPD less than an hour after the alleged robbery occurred.

According to Capt. David Clackley with CPD, officers responded to a call in reference to a robbery at 6:30 p.m.

“The caller reported that a male subject had entered the store and requested money while pressing an object, which he stated was a gun, into the back of the cashier,” said Clackley in the release. “The suspect reached behind the counter and took $40 in cash before fleeing the store. The cashier followed the subject into the parking lot and obtained a vehicle description.”

Responding officers were given a description of the vehicle they were “familiar” with.

“Patrol Officer Michael Wiseman located the vehicle as well as the suspect within minutes of the call being dispatched,” Clackley said. “Video evidence was reviewed on the scene, and identification of the suspect was confirmed. CPD detectives were notified and responded to assist in the investigation.”

McMillan has been charged with first-degree robbery. He was placed in the Chilton County Jail before being released on $15,000 bond two days later.

“Thanks to the rapid response and teamwork of the responding patrol officers, this subject was taken into custody within minutes of the offense,” Clackley said. “Although CPD detectives have a good record of identifying the suspects and making arrests, the work that the patrol officers did in this case made it especially easy to solve. If the officers had not done this, the suspect could possibly still be on the street today (prior to his release on bond).”