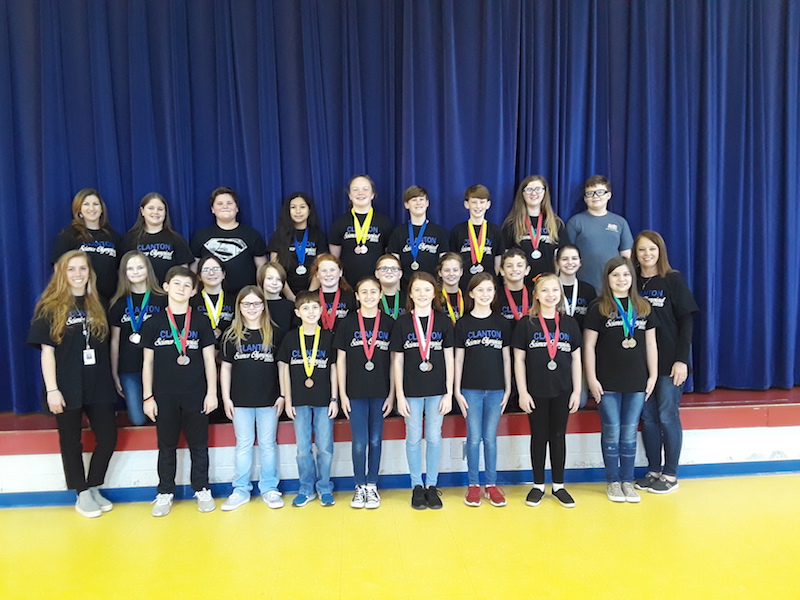 Clanton Intermediate fifth-grade students have won the Elementary Science Olympiad for the second year in a row. (JOYANNA LOVE/ ADVERTISER)

Clanton Intermediate School won overall first place at the Elementary Science Olympiad, hosted by Jacksonville High School, for the second year in a row on Feb. 23.

Competing on the CIS team is open to fifth-grade students.

Members competed in smaller groups or as individuals in 24 categories. The overall team received 20 points for every first place, 19 for every second place, etc. At the end of the day, all of a team’s points were added together to determine the top four places.

Trish Karn, one of the team coordinators, said the majority of the categories are test based. A few require students to complete projects with provided materials.

“There is one called, ‘Which way is north?’ and they use a map to answer the questions,” Karn said.

This year saw a decrease in the number of categories and addition of an aerodynamics category, in which students had to create a paper airplane to fly to a target with provided materials.

She said she was surprised she did so well.

When her name was announced she was “happy and emotional,” Tenna said.

“I liked Quick Sketch because I like drawing,” Tenna said.

During the Quick Sketch competition, students had to draw science terms and their partner had to guess what they had drawn.

Tenna said she prepared for the category by learning science terms.

She liked the Science of Music category because she enjoys music and listening to her brother sing.

“It was a written test about instruments and their classifications,” Libby Cate said.

This category appealed to her because of her enjoyment of music.

“I just like to draw, and my dad is very good at it,” Grayson said.

Grayson said he researched scientific terms to prepare for the event and memorized them.

“I was nervous,” Grayson said of the competition. “I didn’t think I would do that well.”

When he was announced for first place, Grayson said he was “jumping up and down.”

Libby Cate also placed in the top five in the Write It Do It category in which students wrote instructions for completing a craft project to make a zebra.

Libby Cate said she enjoyed seeing if the instructions she wrote resulted in the person completing  the project correctly.

“It was really fun … to be a part of it,” Libby Cate said of the competition.

Libby Cate said she joined the team a little after most of the other members and had to study a lot to be ready.

When it comes to science, Libby Cate especially enjoys her teacher.

“She makes it fun for us to science,” Libby Cate said. “I really like the stuff you can do in science.”

In addition to being proud of the team, Karn was especially proud of student Cayden Meank for placing second in the Calculator Contest because it dealt with math concepts CIS students had not really studied yet.

“Math is my favorite subject, so that’s why I like Calculator Contest,” Cayden said.

“I like doing trick puzzles that are super hard,” Cayden said.

He said competing was “tense … because it was super quiet,” and he was a little nervous.

However, he said he thought he would do well in the categories because he studied hard and had good study partners.

Schools from counties in the region, including Shelby, Jefferson and Huntsville, were at the event.

CIS Principal Louise Pitts said it meant a lot for CIS to win going up against these larger school systems.

While some schools in the competition have the same students compete consecutive years, CIS always takes students that have never competed.

“I like the way Ms. Karn does it because it has given more children in this community the opportunity to go by saying each year we will just take fifth grade,” Pitts said. “It (The win) is commendable again in that these are children that … have not been there, have not been subjected to the pressure of the competition. They are fresh, and to go in and win it was just amazing.”

Karn said it was good to see the students encouraging each other as the category winners were announced.

“That is always neat to be able to sit and watch with the kids how supportive they are,” Karn said.

Brooke Sullivan and Mallory Houston also serve as coordinators for the team.

Karn said students are chosen to compete in December the year before the competition.

“In January, we start having after school practices,” Karn said.

Her classroom also becomes the place for students who get to school early to study.