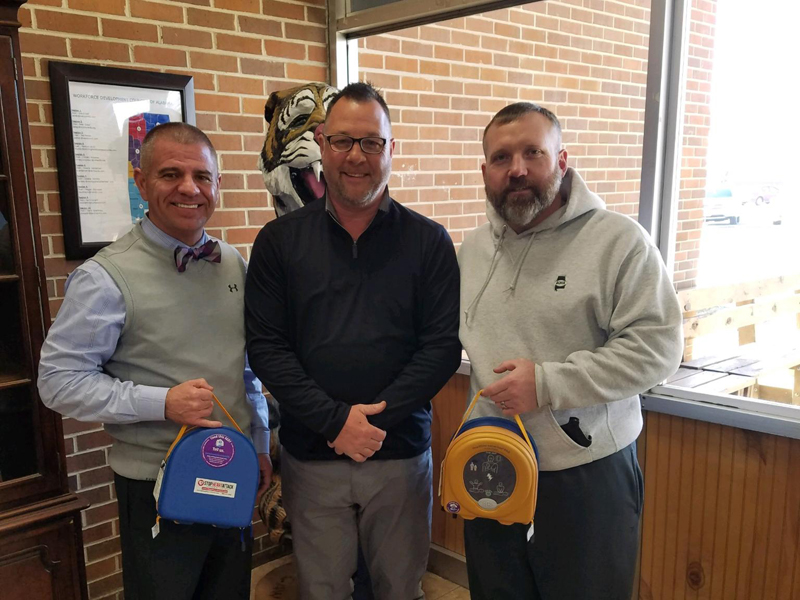 Chilton County High School and its athletic program took another step in the right direction when it comes to safety after receiving a grant to add two automated external defibrillators.

The school was presented with the AEDs on Jan. 16 by way of a grant from the Lord Wedgewood Charity. It increases the AED count at CCHS to four.

According to the American Red Cross, an AED can be used to help those experiencing sudden cardiac arrest by analyzing the heart’s rhythm and delivering an electrical shock or defibrillation, if necessary, to help the heart re-establish an effective rhythm.

“It is something that you hope you never have to use, but is important to have on hand,” CCHS athletic director Tal Morrison said. “Unfortunately, you hear about instances that occur [with players or fans].”

The American Red Cross lists sudden cardiac arrest as one of the leading causes of death in the United States with more than 350,000 estimated to suffer a cardiac arrest this year.

CCHS currently houses an AED in the main school building and the gym. The plan is for one of the additions to travel with the baseball team, while the other will be placed in the softball concession stand.

The softball concession is a location that can be easily accessible if an emergency situation occurs nearby at the football field.

According to Morrison, the goal moving forward is to eventually get four more AEDs in order to have enough so that the school’s field house, weight room and medical room each have an AED readily available.

The Lord Wedgewood Charity was founded after its namesake suffered a heart attack in 2001 while playing golf in Birmingham and an AED was used to help save his life.

That experience inspired him to give back to communities in Alabama while raising awareness about the need for public access of defibrillation and hemorrhage control.

“We contacted them and let them know about our need,” Morrison said. “At first we thought we were just getting one [AED], but wound up with two. “It was a huge blessing and surprise.”

Morrison offered a “huge thank you to the foundation for their contribution to help our young men and women at CCHS.”