CCA plays first game in more than a year

Chilton Christian Academy’s football home opener against Hope Christian School on Aug. 9 was full of positives despite the Patriots losing 28-6.

It was the first football game that CCA had played in more than a year after not fielding a team in 2017.

Fans and students lined the home sideline and showed their support by welcoming back football to the school.

Although it took awhile for the offense to find a rhythm, CCA’s defense came out strong and kept the game within reach.

The Patriots eventually found their way on offense and put together a late scoring drive to avoid being on the wrong end of a shutout.

“It was such a relief off our shoulders,” CCA sophomore Andrew Shirley said.

Senior Jakob Reiter scored the 3-yard rushing touchdown with 26 seconds left. He sparked the drive with a lengthy kickoff return that setup the offense at midfield. 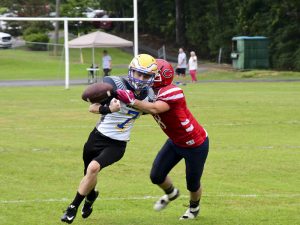 Reiter and Justin Bice were able to find success on the ground during the final drive.

CCA trailed 9-0 at halftime and 22-0 after three quarters of play.

“Having not played for awhile, they started to lose their composure a little bit, but they got it back, which was a sign of strong character,” CCA head coach David Reiter said.

According to David Rieter, he could see a change not just in the play, but also in the way that the players carried themselves during the fourth quarter.

“I’m proud of them,” David Rieter said. “They made some rookie mistakes, but they’re learning.”

Shirley was on the last CCA team two years ago and can see a noticeable difference in the group this time around.

“There has been a huge improvement,” Shirley said. “We all have a natural respect for each other.”

Ready for round 2: JIS kicks off second year…