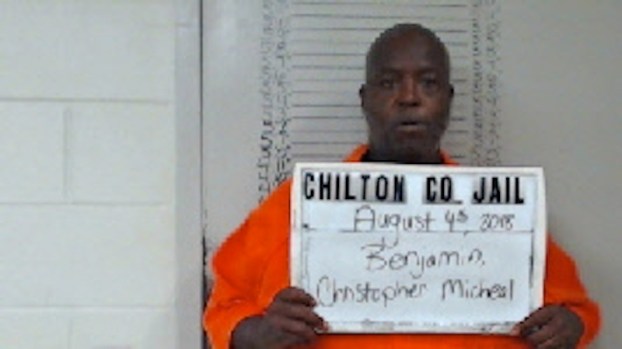 A violent man is behind bars after allegedly sexually assaulting a Clanton minor who was in the care of the offender’s family member, according to authorities.

Christopher Micheal Benjamin, 42, was taken into custody by the Chilton County Sheriff’s Office on Aug. 6 after the victim’s caretaker reported the abuse and information from a forensic interview with the subject warranted his arrest.

Benjamin is charged with first-degree sexual abuse, enticing a child for immoral purposes and parole violation.

It was his third arrest in three days.

Clanton police arrested him on Aug. 3 for public intoxication and then on Aug. 4 for disorderly conduct before he had left the county jail parking lot, according to CCSO.

According to Asst. Chief Deputy Shane Mayfield, Benjamin was released on parole in May 2017 while serving four life sentences for four counts of attempted murder plus a 15-year sentence for shooting into an occupied vehicle and a 25-year sentence for distribution of crack cocaine.

Mayfield has been arresting and re-arresting Benjamin since 1995.

The Department of Corrections has 2.5 pages of disciplinary reports documenting Benjamin’s violent behavior in prison, according to Mayfield.

Reports include instances of stabbing, arson, assault, fighting with a weapon, unauthorized possession of a weapon and prison contraband, disorderly conduct, making threats to employees and more.

“There should have been no expectation that he was going to do better when he got out,” Mayfield said.

Sheriff John Shearon said the state’s prison reform act, which is intended to prevent overcrowding in Alabama prisons by releasing nonviolent offenders after serving some time but retaining violent offenders, is allowing too many violent offenders to slip through the cracks of the system.

“This is what we’re dealing with now,” Shearon said. “Violent offenders are supposed to be in prison, and they’re not.”

“That’s our aggravation — that child should never have been a victim, and we should have never had to have dealt with his case if the justice system had worked and he was where he was supposed to be,” Mayfield said.

By J.R. Tidwell / Editor Sponsorships and a few vendor spots are still available for the upcoming Taste of Chilton... read more