Ring found amongst the corn 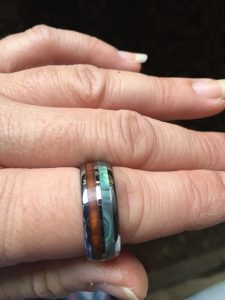 This ring was lost in four tons of corn. Contributed photo

VERBENA— A trip to the pumpkin patch several months ago took a sour turn for one man when his wedding ring fell into the corn pit.

“I really thought the ring was gone because that was like a needle in a haystack,” Penton said.

The pit was dug through in hopes of seeing a glint of the unique design. Later, a metal detector was brought in but, the ring was not found.

The ring was thought lost forever until Monday when Mandy Foshee, Penton’s sister-in-law who helps out at the farm, spotted it.

The corn from the pumpkin patch’s corn pit was transferred to several containers when the patch closed. Penton said the corn was then used to feed the cows located several miles away. On Monday when Foshee was feeding the cows, she saw the ring at the bottom of one of the feed troughs.

“It’s amazing to me that they didn’t swallow it,” Penton said.

She said she was “very surprised, and I’m relieved for this man” that the ring was found.

Penton said Foshee had worked at the pumpkin patch and knew a ring had been reported missing. The person who lost the ring had left his name and phone number with Penton Farms before he left. Unfortunately, the number was misplaced while cleaning up and closing the pumpkin patch for the season. Penton posted information about finding the ring on the Penton Farms Facebook page in hopes of finding the owners.

About an hour later she received a message from a family member of the ring owner. Penton is now expecting a call from the ring owner. She said she was “excited” to be able to return the ring and share the story of how it was found.

Rhonda Hardesty to retire after 18 years as district judge