Festival just the beginning of peach season in Chilton County 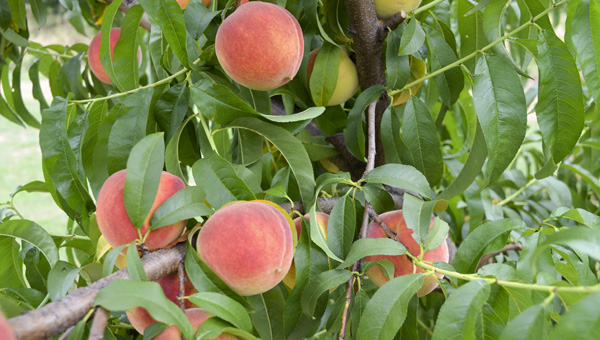 Peaches have become know as the lifeblood of agriculture in Chilton County. (Photo by Anthony Richards)

The Peach Festival is behind us, but the thought of peaches continues to be on the mind of many residents in Chilton County.

Each year the Peach Festival symbolizes the kickoff to the peach season and begins a fascination with peaches over the next couple of months.

Ben Beasley owns 40 acres of property along U.S. 31 in Thorsby, and has been involved with the fruit business since 1993.

He currently leases his land that is occupied by rows of peach trees, many of them with peaches ready to pick.

Over the years, Beasley has seen the craving for peaches and believes that this year is preparing to be no different.

“Since the 1950s, people have been selling peaches off the tailgates of pickup trucks,” said Tim Minor with Sunshine Farms in Clanton.

According to Minor, the climate is the main reason why peaches grow so plentiful in the region of central Alabama.

“Our warm climate allows the trees to thrive,” Minor said. “The fall and winter months are not as harsh as other areas.”

The public is allowed the opportunity to pick peaches on the land owned by Beasley.

“The peaches draw people in and allow the rest of the crops to also be showcased,” Beasley said. “It will continue to build through July and August, before winding down in September.”

Beasley accommodates anybody who wants to have the experience of picking peaches straight from the limb.

He has a tractor that can take elderly residents who want to join in on the fun through the field.

“You can’t deny those people who want peaches,” Beasley said.

Tierce looks to leave her mark as 2016 Miss Peach

Hannah Tierce’s nerves were suddenly calmed when she heard her named called as the winner of the 2016 Miss Peach... read more