An alcoholic beverage was sold legally in Maplesville on Friday for the first time since at least 1920.

That was the year Prohibition began, and even after it ended in 1933, Maplesville—like much of Chilton County—remained “dry.”

Residents of municipalities Clanton, Jemison and Thorsby had voted to go “wet,” but such votes failed in Maplesville.

But Chilton County voters approved for the sale of alcoholic beverages to be allowed across the county in a referendum on the March 1 ballot.

Seales Grocery in Maplesville is believed to be the first business to obtain a license for the sale of alcoholic beverages following the vote for the county to go wet. 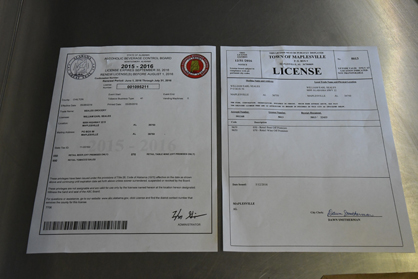 It’s official: Seales Grocery in Maplesville has obtained licenses from the town and state to sell alcoholic beverages. (Photo by Stephen Dawkins)

Seales Grocery owner William Seales gained approval for a license from the Maplesville Town Council on May 9 and took seven trips to Montgomery before securing a state license.

Seales said the process was extensive, including a background check, providing fingerprints and presenting a property deed.

In addition to time, Seales said much money has been invested into the sale of alcoholic beverages.

Seales estimates he has spent $14,000, including filing fees, $800 for liability insurance, $7,000 for coolers and what was spent of the first shipment, which was scheduled to arrive Friday.

“You’ve got to have some money to sell beer,” Seales said.

Seales said he is not sure how long it will take him to make a return on his investment, but he is hopeful sales will be high because his is the only store in Maplesville with plans to sell alcohol for the time being and because of heavy traffic by the store on Hwy. 22.

The timing of receiving the license can only help, as Seales Grocery will have alcohol to sell prior to the 24-Hour Challenge motorcycle race this weekend and the Memorial Day holiday.

Seales said he purchased the store in 1983.

“And did I ever think I’d sell alcohol? No way,” he said.