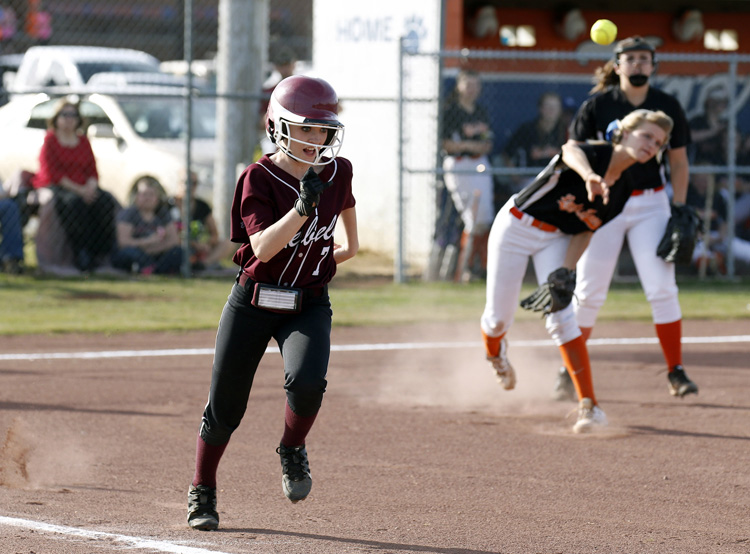 Abby Cleckler of Thorsby hustles down the first base line on a sacrifice bunt, as she attempts to beat out a throw by Chilton County third baseman Cassie Phillips on Monday. The Tigers won 4-0. (Photo by Brandon Sumrall / Special)

Chilton County varsity softball picked up a 4-0 win on Monday at home against cross-town rival Thorsby, as six errors cost the Rebels heavily in the loss.

A leadoff walk by Abby Cleckler and a double by Taylor McManus started the game and resulted in nothing on the scoreboard for Thorsby in the top of the first.

Meanwhile, the Tigers put two runs on the board in the home half of the inning. Destinee Scott got the inning started by reaching base after being hit by a pitch, and a Rebels error on a Caitlin Burnette fly ball to left scored Scott and advanced Burnette to third.

One out later, the Rebels suffered a case of deja vu as another error on another fly ball to left scored Burnette and left Gabriel Kelley standing on third.

After one inning of play, the Tigers held a 2-0 lead.

Thorsby’s Lauren Reeser singled and Briana Connell doubled, but that was all of the offensive action for both teams trough the second inning, while the third inning would come and go with only a single by Burnette.

As play went to the fourth inning, Chilton County clung to a 2-0 lead.

A Tigers error on a ball hit by Irelan Childress and a single by Reeser gave the Rebels two on with one out.

However, a sacrifice bunt and a ground ball back to the pitcher failed to plate a run as Thorsby remained in a two-run deficit.

Tadaja Wright started the home half of the fourth with a single, and a walk to Morgan Dennis gave the Tigers two on with no outs.

A ground ball Brianna Connell resulted in a throw to third that sailed into left field allowing Wright and Dennis to score while giving the Tigers a 4-0 lead.

An Abby Cleckler single was all of the offense for the Rebels in the fifth, but Taylor Smitherman reached on a Rebels error and a single by Morgan Dennis did nothing to help the Tigers.

A three-up, three-down top of the sixth for Thorsby and a pair of singles by Anastasia Pitts and Scott brought the inning to a close with the Rebels still trailing by four and down to their final three outs.

Madyson Ellison got the seventh started with a single, but a ground ball back to the pitcher, a strike out and a fly ball to Caelyn Griffin in center field brought the game to a close.

Scott pitched a complete game shutout for the Tigers, allowing only five hits, with one walk, while striking out five.

Connell went 1-for-3 with a double for the Tigers at the plate.

Reeser led Thorsby at the plate with a 2-for-3 performance with two singles.

The Jemison High School robotics team was recognized on Tuesday after finishing second in a nationwide engineering competition. Pictured are... read more