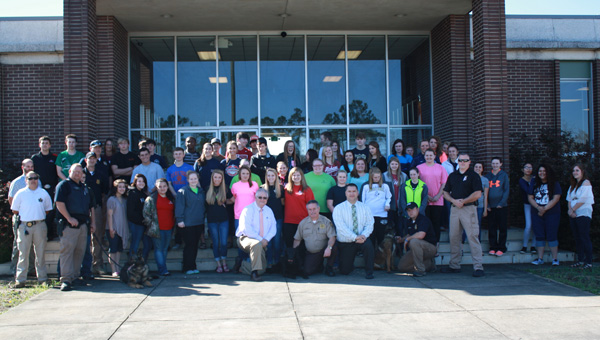 On March 15, LeCroy Career Technical Center FFA hosted the first srime prevention program. As part of the group’s annual Program of Activities, the program was developed as a way to inform students about risky behavior that could be detrimental to their life and or career.

Sheriff John Shearon was instrumental in getting this program off the ground, and organizers thanked him for his hard work in getting people together for this worthwhile cause.

Shearon spoke about the dangers of social media, bullying and various other topics that could hinder one’s dreams after high school. 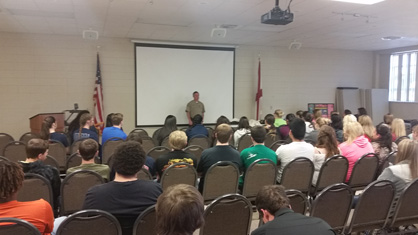 Narcotics officers from the sheriffs department along with the Clanton Police Department spoke to the students about the drug problems that our country is faced with.

Students were able to see up close and personally both paraphernalia and mock-ups of what various drugs look like.

Narcotics officers also spoke about the illegal use of prescription medication and the serious criminal issues that could arise with their use. Officers shared personal stories with the students about tragic situations they have seen related to drugs.

Outside the conference room, students were awed by the K-9 officers through a drug search demonstration.

At the conclusion of the event, local residents Travis White and Lacey Owens grabbed the students’ attention one last time with their story of personal struggle with addiction.

White, a Navy veteran who has served tours in Afghanistan and abroad told of how drugs began to consume his life and ultimately took his family and his business.

Owens spoke as well on how the effects of drugs on her from an early stage in life led her to jail. She shared stories of how the addictive drug separated her from her family, how she didn’t sleep for days at the time, and how her struggle with addiction is something that will be with her for the rest of her life.

This was White’s first time speaking to a group such as this, and both he and Owens are using their stories about addiction to try to make sure others do not make the same mistake.

LCTC officials thanked everyone involved with making this event possible, and also White and Owens especially for having the courage to battle addiction on a daily basis and for being courageous enough to face 150 students and tell their stories.