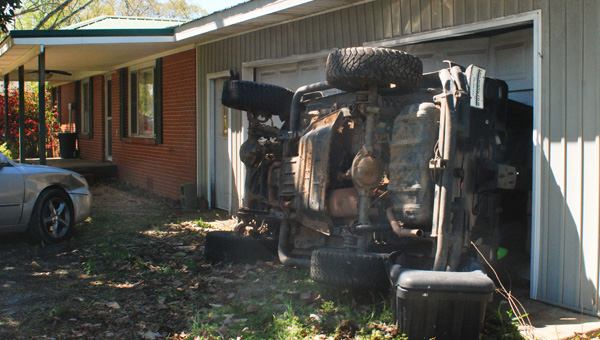 A Jeep Wrangler left the roadway and struck a house off Thrash Road on Tuesday. (Photo by Stephen Dawkins)

A vehicle ran off Thrash Road and into a house Tuesday morning in Clanton.

The driver of the vehicle sustained minor injuries, according to Clanton Fire Department Chief David Driver, perhaps surprisingly based on the scene: a Jeep Wrangler on its side, leaning against a dented garage door. 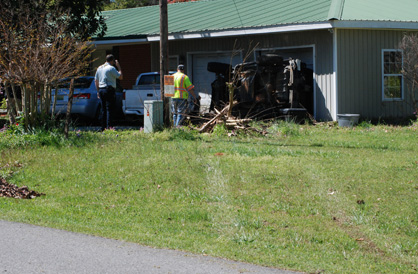 The vehicle veered between a power pole and its guy-wire before striking the house.

Driver said the vehicle had just turned onto Thrash Road from Lake Mitchell Road s when it veered off the road, went between a power pole and its guy-wire, plowed over a crepe myrtle, struck a vehicle parked at the residence and rolled onto its side, coming to rest against the garage door.

Neighbor Ashley Lee said she and others were outside at the time of the incident, which occurred at about 11 a.m.

“It looked like something under her truck broke,” Lee said.

The driver had already crawled out of the vehicle by the time neighbors arrived, Lee said, and was bleeding from her head.

Lee said she advised the driver to sit down.

“You don’t feel that yet,” Lee said of the driver’s injuries. 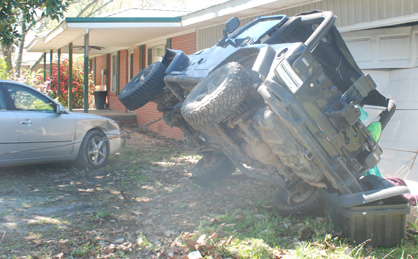 A wrecker service removes the vehicle from the property.

Daniel Duke said he was asleep at the residence when he was wakened by a crash. He expected a wreck on the road in front of the house, but went outside to see it was much closer.

The Higgins Ferry Park boat ramp is a busy spot this time of year. Fishermen come from surrounding areas to... read more