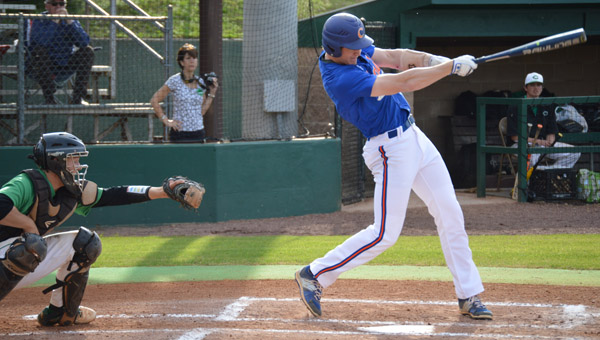 Hunter Bennett of Chilton County High School drives in a run during Game 1 of a doubleheader at home against John Carroll on March 16. (Photo by Brian Millican / Special)

The Chilton County Tigers got back to their winning ways on March 16, as they handed the John Carroll Cavaliers two losses and improved to a record of 11-7 on the season.

Game 1 was close, but the Tigers pulled out a 2-1 victory, while in Game 2, Chilton County’s bats caught fire and they were able to plate 13 runs, winning by a score of 13-7.

John Carroll took an early 1-0 lead in the top of the first of Game 1, but Chilton County responded with a run of its own.

After collecting six hits in a doubleheader March 15, Cade Hatch led off the inning with a double, moved to third on a grounder by Giquon Lane, and scored on a single by Hunter Bennett.

At the end of one, the score was tied at one apiece.

Jarrett Ricks turned in his second consecutive strong performance on the mound, allowing only one run to score and striking out six in six innings of work.

His team gave him the lead in the second inning when Hatch hit a hard ground ball for a single that drove in Dustin Langston from second.

The two runs were all that the Tigers needed to win the game.

Hatch went 3-for-3 at the plate with one RBI, Bennett had a hit and a RBI and Cody Minor was 2-for-3 with two singles.

In Game 2, the Cavaliers plated three runs in the top of the second inning to take a 3-0 lead.

Not to be outdone, Chilton County responded with a bold statement in the bottom of the inning, as Colby Ramsey, Hatch, Corbin Bice and Langston combined to drive in five runs.

At the end of the second, the Tigers had a commanding 8-3 lead.

Two more runs crossed the plate for the Tigers in the third inning and one in the fourth.

Hatch drove in Kendall Davis with a line drive single in the second inning and eventually came around to score on a passed ball.

The Tigers grabbed an eight-run lead, as Colby Ramsey singled in Trever Thompson in the fourth.

Working with a five-run lead, Bennett and the Tiger defense kept the Cavaliers from scoring again until the fifth inning.

Bennett gave up two runs in 4 3/4 innings of work.

He was replaced by Seth Harris late in the fifth inning.

Two additional runs scored for John Carroll in the top of the sixth, making the score 11-7, and suddenly making the game interesting again.

However, Chilton County head coach Ryan Ellison teaches his players to play every single pitch to the best of their ability, regardless of the score.

This concept proved to benefit the Tigers late in Game 2, as it would have been easy for the players to let off the gas and try to cruise to victory.

When John Carroll only needed four runs to tie the game, Ellison pulled his boys aside and reminded them to go out and win every pitch.

Chilton County needed to score in the sixth to regain momentum, and that is exactly what they did, scoring two runs and increasing the lead to 13-7.

Harris pitched well in the top of the seventh, and this one ended at 13-7. Bennett had three RBIs, while Hatch and Ramsey each had two RBIs.

Instead of cruising to victory, the Tigers played the best they could until the end, and it paid off and they walked away with two victories on the day.