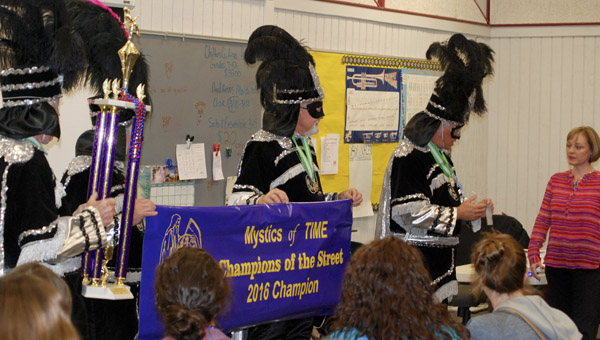 Members of the Mystics of Time Mardi Gras Organization on Wednesday presented the Verbena Marching Band with first place from this year’s celebration. (Photo by Anthony Richards / Advertiser)

Verbena’s marching band was recognized Wednesday, for recieving the highest judged score for its performance during a Mardi Gras parade on Feb. 6 in Mobile.

This was the second time participating in the celebration for many of the students, and the Red Devils have already been invited back as the returning champions for next year’s festivities.

“We’ve been before, but the floats just keep getting bigger and bigger every year,” drum major Jacob Penton said. “It’s a lot of fun to be part of that progression.”

The trophy presentation was given in the band room at Verbena High School, and a handful of members from the “Mystics of Time” were there in full regalia to hand-off the award.

The first place finish is even more special for Verbena, due to the final tally being voted on by the various band members who participated in the event.

“The fact that we even got chosen proves our effort,” trumpet player Amber Tucker said. “We consider everything in public to be a performance, whether it is five of us playing during a basketball game or marching on the streets for Mardi Gras.”

The “Mystics of Time” are a Mardi Gras organization that has held a parade each year throughout the streets of downtown Mobile since 1949.

They are known for wearing colorful attire and are dressed from head-to-toe, including a mask and headgear to keep their identity a secret.

According to Verbena Band Director Randi Simpson, the band members practiced for a month to build up the necessary conditioning in preparation for what they would encounter during the 5-mile parade route.

“They had to manage their air supply while playing accurately as well as keeping the steps right,” Simpson said. “The body carriage has to be correct for some of the heavier instruments. It’s an aerobic activity that involves every muscle.”

That endless repetition and countless days paid dividends in the long run, as the band was thrown into a hectic environment with plenty of distractions to disrupt their performance.

The Red Devils marching band consists of about 30 members including color guard.“I am just super proud of the kids,” Simpson said. “They spent days marching down the streets to build up their endurance level. They worked really hard, and they truly deserved it.”

Theft victim: Two pickup trucks, including the one pictured, were stolen from Clanton Tractor along with three trailers and six... read more