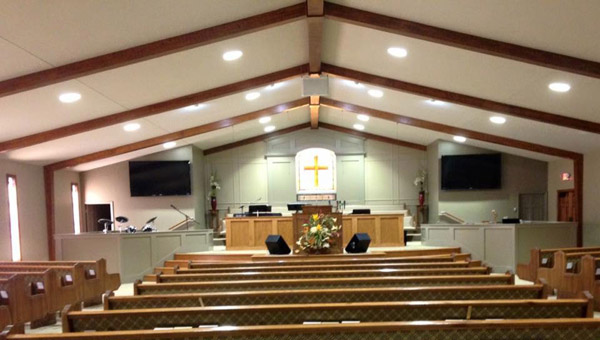 Renovations were recently completed to the interior of Thompson Chapel Assembly of God’s sanctuary in Jemison. (Contributed Photo)

Thompson Chapel Assembly of God in Jemison received a complete team effort from its congregation, which came together to help complete an upgrade of the church’s sanctuary.

The renovation process took 12 weeks to complete. During that time worship services were held in the church’s Fellowship Hall and Gymnasium.

“Everybody just kept doing what they always do,” Thompson Chapel Pastor Mark Bolton said. “It all worked out because they were faithful.”

According to Bolton, when churches go through renovations and the normal schedule is disrupted, at some point there may be a drop in attendance.

“In the three months that we were meeting in the fellowship hall or gym, we actually saw an increase in both attendance and giving,” Bolton said.

Although the location remains the same, the rest of the sanctuary structure from ceiling to floor has gone through some form of renovation.

The sanctuary was originally constructed in 1985 under the direction of the Rev. Bunion H. Porter, but the facility was due for a full overhaul after 30 years.

According to Terry O’Brien, project volunteer and member of Thompson Chapel, The church is known for strong music performances during its services.

However, it got to the point where it was just too cramped and some changes needed to be made, O’Brien said.

According to Bolton, who was a teenager when the sanctuary was originally built, just as it was then, the current renovations this time around were performed by a mostly volunteer effort.

“The congregation wanted to do something as an act of worship and to propagate the gospel and the work of the church,” Bolton said. “It was a labor of love, and an opportunity for us to honor what people before us had done.”

Thompson Chapel was originally founded as The Independent Church of God in the 1940s under the direction of the Rev. B. B. Kirby.

The congregation eventually moved into its first permanent structure in 1951 and changed the name to Thompson Chapel in honor of Ollie Thompson, who donated the small parcel of land where the chapel was built.

According to Bolton, today, Thompson Chapel is a thriving congregation deeply rooted in Pentecostal heritage.

The most recent renovations include the addition of stain glass windows and the recovering of each pew.

These renovations have helped solidify that future generations will continue to have a place to call home and share in their faith.

A service will be held March 13 at 5 p.m. to commemorate God’s faithfulness and blessings to Thompson Chapel.

Sister Grace Church will minister during the special service of praise and thanksgiving.

Schools save money on energy costs