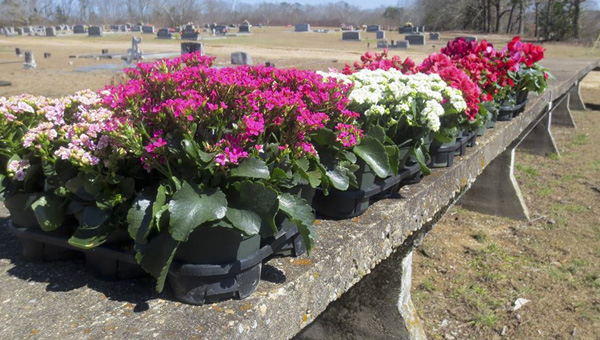 Plants were donated to Chestnut Creek Heritage Chapel by a local grower after hearing about new leaks to the chapel’s sanctuary. The non-profit group held an event Feb. 27 for people to give a donation and receive a plant. (Contributed)

When recent heavy rain at Chestnut Creek Heritage Chapel in Verbena caused new leaks in the sanctuary, members of the community stepped up to help.

“We have known for a while that we need a new roof,” Chestnut Creek Heritage Chapel secretary Ola Taylor said. “The heavy rain just made it more evident.”

When members of the non-profit organization discovered the leaks, they quickly worked to figure out a way to raise funds for the roof repairs.

“A very kind grower who does business in Chilton County donated 145 plants to us,” Taylor said. “We decided to host a time on Saturday where individuals from the community could come by and make a donation to the chapel and in return, they got a plant.”

Taylor said the individual who donated the plants wanted to remain anonymous, but the plants consisted of cyclamens and begonias that were leftover from Valentine’s Day.

“They were truly beautiful,” Taylor said. “The plant grower has simply grown more than they needed for Valentine’s Day. We put everything together on Wednesday and had the sale on Feb. 27 and we had a wonderful turnout. All we asked for was that people give a suggested donation of $5 and they would get a plant. People stopped by and gave donations and toured the chapel. It was just a wonderful day.”

“We were very touched by the turnout of people who stopped by to help out,” Taylor said. “The people were just very, very generous.”

Chestnut Creek Heritage Chapel became a non-profit organization in 2014 for the purpose of preserving Chestnut Creek Baptist Church, located in the Cooper Community near Verbena.

The church was originally built in 1818, and the group is working to restore the church for the community to be able to use for various programs, singings and reunions and a site for historical information.

The church building has been used for different events including a Christmas Bazaar, and a singing for Scottish singer-songwriter Jim Malcolm.

An upcoming event on April 9 at the chapel will also serve as a fundraiser for the group’s efforts to restore the church.

“We will be having Cooper Heritage Day which will consist of a congregational singing,” Taylor said. “We will also be selling Boston butts and barbecue plates. We hope the weather is good so we can serve dinner on the grounds. We also hope to have some activities for our children to keep them entertained, and we will have a big group picture taken.”

For anyone interested in finding out more information about the group visit www.chestnutcreekheritagechapel.com.

Editor’s note: The Clanton Advertiser invited candidates for local offices to submit information about themselves leading up the March 1... read more