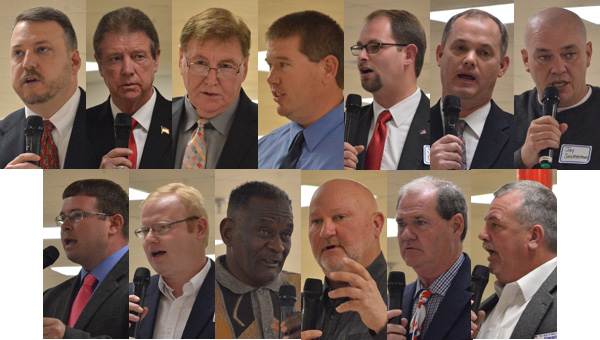 Chilton County voters had the opportunity to hear from candidates from local offices during a political forum Tuesday.

The forum was hosted by the Chilton County Chamber of Commerce and held at Senior Connection in Clanton.

Candidates for district court judge and district attorney for the 19th Judicial Circuit also had the chance to speak to attendees.

Read more about them in the Thursday edition of the newspaper.

Twelve of the candidates for the commission will appear on the March 1 Primary Election ballot, vying for Republican nominations.

Robert Binion was the lone Democrat in the forum field. He will appear on the General Election ballot in November.

Questions were pre-selected by Chamber representatives, with input from the public.

Potential questions were shared with the candidates ahead of time—but not the exact questions they would be asked.

The candidates made their cases to about 150 people in attendance on topics ranging from economic development, a recently purchased industrial park, technology, budgets, taxes and roads.

Matt Mims said the industrial park, which was purchases jointly by the county and city of Clanton, could boost economic development—but should be only the beginning.

Jason Pierce stressed that the property must be carefully managed.

“It has to be structured right,” Pierce said. “We have to do everything we can to make it attractive.”

On the topic of economic development, Shannon Welch touted his work with the city of Jemison.

“I don’t know of a city anywhere that has worked harder on economic development than we have,” Welch said.

The condition of Chilton County roads is most always a topic at commission meetings.

Jay Smitherman, who said he worked for several years in the road department, said it was important for the public to be able to count on the commission.

“We don’t need to tell them we’re going to do something, and then two years later, they’re back at the same meeting,” Smitherman said.

Candidates generally agreed that additional funds are needed to pay for road repairs and other services.

Jimmie Hardee said the commission should ensure that taxpayer money is being well-spent.

“Every department has to be held accountable,” Hardee said. “We’ve got leadership in each department that is in charge of spending this money.”

Joseph Parnell said further spending cuts are not the answer but that additional sources of revenue are needed, including a tax base expanded through growth.

“We have cut until there is nothing left to cut,” Parnell said. “If we grow…eventually we’ll be able to fix these roads.”

Robert Binion said he would consider all means of increasing revenue, even if it meant increasing the sales tax to fund needed projects.

“We can’t splurge, but we can bring in some money to do what we need to do for he people of this county,” Binion said.

But most candidates said they would not favor a new tax.

“I’m not for raising taxes,” Greg Moore said. “Everybody is taxed to death.”

The commission is responsible for overseeing budgets for various departments, and candidates were asked about their experience with budgets.

“If you’re a business owner, you know how to do a budget,” Allen Caton said about his experience as an entrepreneur. “If not, you won’t be in business long.”

Joe Headley, a fellow incumbent commissioner, said the group has done a good job in this regard.

“We’ve kept everything intact pretty good,” Headley said. “This budget thing is critical to the county.”

“We all work under a budget whether we like it or not,” Ogle said. “It is our job as county commissioners to balance the budget.”

Candidates were asked how they would make use of technology. Jeremy Smith said enhancing communication is important.

“The main thing is making sure we can communicate well with each of the department heads in the county,” Smith said. “I’m all about cutting costs, but I’m not about cutting effectiveness.”

Steve Langston said the commission must make sure it is doing all it can to promote the county’s resources.

“We want to make sure that we have a website to promote our parks and all this county has to offer,” Langston said.

Donna Tate, a spokeswoman for Smart Start of Alabama—one of the approved vendors in the state—explained a little background for... read more