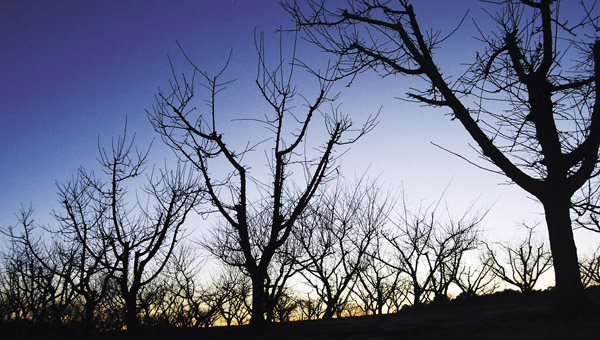 Rows of peach trees share the glow of the setting sun. The chill hour season ended Monday, and blooms are expected by mid-March. (File)

Monday marked the official end of the chill hours season for peaches within Chilton County.

“Numerically, it’s not as many as we would like to have, but I think that the blooms should proceed just fine,” Chilton Research and Extension Center Director Jim Pitts said.

It took a little longer than normal, but the last couple of weeks helped make up the difference.

According to Pitts, the peaches are maintaining within the range of 800 chill hours. The farther the trees get away from 1,000 hours, the longer the bloom period will likely last.

Chill hours are tallied during the peach trees’ dormant period, when cold weather is valuable because it keeps buds from opening too early, exposing them to a potentially damaging late freeze.

From the end of December to Monday, the peaches gained about 500 chill hours and made a major push within the past three weeks.

Consistent temperatures below 45 degrees have been a regular occurrence over that time which allowed Chilton County to make up ground prior to the chilling season officially reaching its end.

“We would normally get around 1,000 hours,” Pitts said. “If you get within 80 percent, you may have a longer bloom period, but they will still do well.”

A short bloom period consists of a majority of the peaches completing the bloom cycle and ready to be picked at one time, while a longer bloom period means that peaches will spread out their harvest over a length of time.

Pitts said farmers prefer a short bloom period, so that they can harvest the most peaches as possible at a certain time.

Over the years, science has become a more involved part in the process of determining the final figures and creating an accurate estimate of peaches for the upcoming season.

However, at the end of the day, the final statistics will be dependent on the whims of Mother Nature.

“We’re not making marbles here, we’re trying to grow peaches and dealing with a lot of different things,” Pitts said. “We’ve still got these late spring freezes to be worried about, so we’re not out of the woods yet.”

According to Pitts, the normal bloom period is mid-March, and he believes that target goal will be met.

“Historically over the years this was the last day, but we could possibly get some more chilling,” Pitts said. “It’s a lot better than what it was looking like at the end of December.”

Comfortable temperatures lead into the weekend

Consistency is the theme of this week’s weather forecast.

According to the National Weather Service, Tuesday will have mostly clear skies with a high of 62 and a low of 39.

However, there is projected to be a temperature increase on with a high of 70 and a low of 53 on Friday.

That will set the tone for the rest of the weekend, as Saturday is expected to have mostly cloudy skies with a high of 71 and a low of 53, while Sunday will also have a high of 70 to accompany a 20-percent chance of showers.