Five individuals were arrested Feb. 10 after the Jemison Police Department conducted a drug search at a residence off Smith Road.

According to a press release from the Jemison Police Department, after an extensive investigation into the illegal sale and distribution of methamphetamine, JPD executed a search warrant at a residence in the 100 Block of Smith Road. 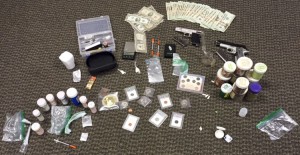 Authorities seized drugs and drug paraphernalia from a residence in Jemison on Feb. 10 after executing a search warrant for the home.
(Contributed photo)

During the search, officers seized 1 ounce of crystal ice methamphetamine, a $6,000 street value, two firearms (one stolen from Calera), and various items of drug paraphernalia, according to the release.

Five people were arrested including Damon Kent Watley, 46, of Jemison; John Mankston, 53, of Verbena; Savannah Lussier, 28, of Clanton; Tonya Cox, 33, of Clanton and Lauren Collum, 31, of Clanton, for charges including felony possession of a controlled substance, felony receiving stolen property and possession of drug paraphernalia.

“We have received many complaints concerning illegal drug activity taking place at this residence,” Jemison Police Chief Shane Fulmer said. “I am very pleased with the investigation and the outcome of executing this search warrant. All illegal drugs are terrible, and methamphetamine is probably the worst. Anytime we can remove this drug from our streets and arrest the people who are responsible is not just a victory for us, but a victory for the citizens in our communities.”

The Chilton County Sheriff’s Department and the Clanton Police Department assisted in executing the search warrant, according to the release.

Information was unavailable regarding an upcoming court appearance for Lussier.