Hillary Megan Cleckler and Ross Wesley Parker were united in marriage on Nov. 21 at 4 p.m. at First Baptist Church in Opelika.

The candlelit ceremony was officiated by Dr. Michael E. King. 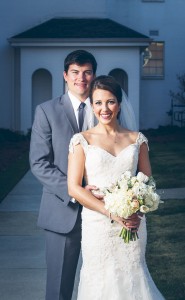 The bride is the daughter of Mr. and Mrs. Barry Wade Cleckler of Jemison.

She is the granddaughter of Mr. and Mrs. Cecil Douglas Cleckler of Thorsby and Mr. and Mrs. Jerry Wayne Wright of Clanton.

The groom is the son of Mr. and Mrs. Robert Wayne Parker Jr. of Enterprise.

He is the grandson of Frankie Carolyn Stinson and the late Franklin Lavone Stinson of Dothan, and Barbara Jane Parker and the late Robert Wayne Parker Sr. of Clayhatchee.

Cousins of the bride, Isabella Wright and Lorena Wright served as program attendants and greeted guests as they entered the church, while Selena Wright, also a cousin of the bride, served as the guest book attendance.

Anna Hovey was the chosen florist for the weekend.

She used a combination of baby’s breath, magnolia leaves, and pillar candles in various arrangements inside and outside the church.

The church doors were adorned with large wreaths made of baby’s breath and the railings were woven with an array of magnolia leaves.

The pews were embellished with swags of baby’s breath tied together with ivory silk ribbon reaching to the floor.

The corners of the baptistery and bases of the altar hosted large, pillar candles in vases along with magnolia leaves decorating the base of the arrangements.

The bride, presented in marriage by her father, wore an Alencon lace timeless and classic, fit and flare wedding gown designed by Justin Alexander.

The gown was emphasized by a sweetheart neckline, cap-sleeve shoulder, plunging back neckline aligned with crystals and beading, and a chapel train.

The natural waistline was accentuated with a jeweled belt and the bride completed her attire with a ballet-length veil.

The bridal attendants wore full-length lace bridesmaid gowns in the color of charcoal grey, also with plunging back necklines complementing the bridge’s gown.

Whitney Sheridan of Prattville and Elizabeth Whitton of Enterprise served as matrons of honor.

Betty Schiffer of Auburn served as maid of honor.

Chloe Harris of Madison stood by the bridge as flower girl.

Jake Minor of Clanton stood by the groom as ring bearer.

Other members of the bridal party included Lee Merritt and Will Merritt, both of Slocomb, Joe Sparks of Huntsville, and Doug Taylor of Opelika serving as ushers for the guests.

Pianist and soloist for the ceremony was Caleb Hart.

Nina Casper and Skylar Cope read scripture as part of the ceremony and Nicole Hester coordinated the wedding ceremony and reception.

Ted Gipson of Focal Point Video and Editing and Dale Morano of Dale Morano Photography captured the evening by means of video and photography.

The reception was held at the Event Center Downtown Opelika where the bridge’s parents entertained with a festive reception.

The ballroom was decorated with the bride’s chosen flowers.

The entrance to the party was marked with votive tea light candles lining the entrance way and a rustic “P” on the door.

The guest tables were draped with white floor-length tablecloths and topped with charcoal grey overlays.

The guest tables were centered with different floral and candle arrangements accompanied by lanterns.

Food was served in the middle of the ballroom for guests to enjoy.

A menu of chicken tenders, meatballs, buffalo chicken dip, tomato tea-sandwiches and an assortment of fruits, veggies and cheeses was served.

Two meat carving stations accompanied the buffet tables and included a choice of pork tenderloin or roast beef for sandwiches.

The bride’s cake, made by Tania Cobine, was inspired by the bride’s gown.

It was a traditional five tier white cake with layers of buttercream icing within each tier.

The groom had his favorite dessert served.

Pans of hot bread pudding with a caramel bourbon sauce were available for the guests to enjoy.

The energetic band, The Second Coming from Montgomery, entertained the guests in the ballroom under twinkling lights where the guests, bride, and groom danced the night away.

After honeymooning in Punta Cana, the newly married couple resides in Auburn.

The groom is a 2009 graduate of Troy University where he obtained his bachelor’s degree in sports management. He is currently employed with South Alabama Brick Company where he is a sales representative for the Auburn/Opelika/Lee County areas.

The bride is a 2012 graduate of Auburn University where she obtained her bachelor’s degree in accounting. She is currently employed with Auburn Global where she is the staff accountant.