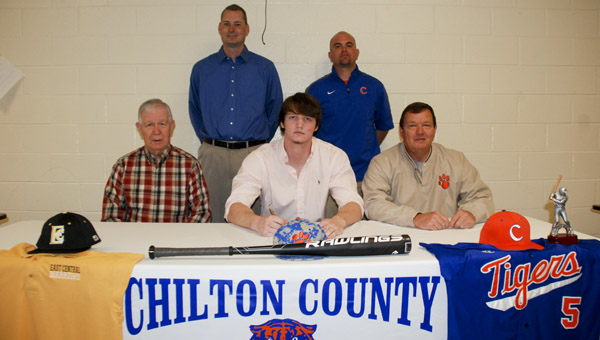 “He had several looks from different colleges, and he picked this one because he thought that it would be best for him,” said Bennett’s father, Jeff.

Bennett plays first baseman and pitcher for the Tigers, but he will likely make the transition to the outfield at the college level.

At 6-foot-5 and 238 pounds, Bennett is an intimidating presence at the plate.

Due to his size, he has developed into a powerful hitter that can alter a game with one swing of the bat.

After playing both football and baseball during his freshman year at CCHS, Bennett made the decision to focus his attention entirely on becoming a better baseball player.

Josey Shannon was Bennett’s coach for several years prior to Ryan Ellison taking over the reigns last season.

Bennett spent this past summer playing for the East Coast Baseball Organization and director Joe Caruso.

The program hosted tournaments at Southeastern Conference venues such as Alabama, Mississippi State and Ole Miss.

“All those showcases he did were in front of college and pro scouts,” Bennett said. “He’s got three major league scouts from the Boston Red Sox, [Chicago] Cubs and Cincinnati Reds that will be following him this year.”

According to Bennett, one of the reasons to go the community college route was the opportunity to be drafted that will exist after one year, as opposed to a four-year university where a player does not become eligible until after three years.

On top of tuition, housing is also provided with the scholarship as the baseball team has its own dorm. The only expense remaining is the cost of textbooks.

“I’m a single dad, so it was a lot of help and a big deal,” Bennett said. “I think that he looked for something that wasn’t only the best for him, but also for his family.”

By Brandon Sumrall | Special to The Advertiser It took a late-game comeback, but the Jemison varsity girls basketball team... read more