Thorsby builds up for late-season surge

The Thorsby Rebels successfully defended its home court on Friday night as both the varsity girls and boys each came away with wins over the Holtville Bulldogs.

The girls’ squad got the evening started, as it jumped out to an early first period lead and never looked back en route to a 50-19 win. 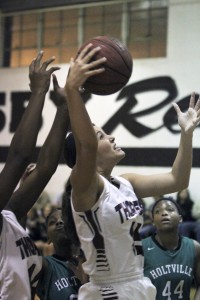 Thorsby’s Sabrina Ellison corrals a rebound in the post against Holtville on Friday. Many county teams will wrap up regular season play this week. (Photo by Brandon Sumrall)

Five points from Kerri Robinson, four from Sabrina Ellison, and a three-pointer from Adi Argent allowed the Rebels to jump out to a 12-0 lead.

The Bulldogs finally broke Thorsby’s run with a basket, but was answered by baskets from Lauren Wyatt and Argent that extended the Rebels lead to 14.

A three-pointer by Holtville kicked off a 5-0 run. However, the Rebels maintained a 16-7 lead after one quarter of play.

Robinson started the scoring in the second and with a long range shot from Lilly Barnett ignited a 9-0 run and a 25-7 Thorsby lead.

The Bulldogs only basket of the second period came with 2:34 to play and was immediately answered with another basket by Barnett.

Thorsby took a 30-9 lead into halftime.

Just 12 seconds into the third period and a basket Holtville would once again be their only basket of the period.

However, the Rebels also had a hard time getting going in the period, as Argent put Thorsby’s first points on the board at the 3:57 mark.

Thorsby made up for the cold start and added 15 unanswered points to extend its lead 47-11 at the end of the third period.

A Bulldog basket to start the fourth was answered by a three-pointer from Argent, and another basket from Holtville started a 6-0 run but with a hot clock in the final period of play.

Thorsby’s varsity boys would not get off to the same hot start as the girls, but poured it on late to pick up a convincing 76-47 win.

Grayson Bice knocked down a three-pointer on the Rebels’ first possession of the game, and a basket from James Sellers helped Thorsby jump out to an early 5-0 lead.

Seven unanswered points by Holtville gave the Bulldogs a two-point lead, but Ben Thornton tied the game at 7-all with two shots from the free throw line.

Two more free throws from James Sellers gave Thorsby a two-point lead, while Michael Fortner grew the Rebels lead to four with just under two to play in the first quarter. Thorsby led 13-10 after one.

The Rebels’ three-point lead remained through the early minutes of the second period when a Sellers basket started a 16-2 Rebels run that blew the game wide open, as the Rebels took a 36-27 lead to the half.

Calvin Plyler sank back-to-back baskets that fueled a 12-0 run by the Rebels.

The Bulldogs finally broke the run at the 1:55 mark of the third period, but a basket from Dylan Carroll began a 6-0 run for Thorsby, which brought the score to 61-33 at the end of the third.

The Bulldogs would start the final period on a 5-0 run that would be brought to an end with a three from Thornton.

The two teams traded blows through the final period but the Rebels led by 30 points and the clock continuously ran.

Sellers, Fortner, and Plyler all pitched in with 12 points for the Rebels. Sellers added eight rebounds, two steals, and five blocks, while Fortner picked up nine rebounds and three steals to accompany Plyler’s six rebounds and two steals.

Thorsby and Verbena faced each on the football field in 2015. Next year it will be a region game after... read more