For Chilton County for the year of 2015, the EMS person was James Avery Dale. 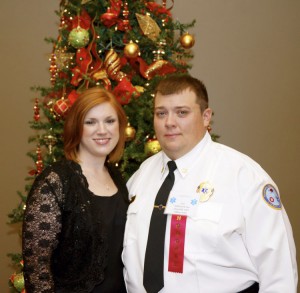 Birmingham Regional Emergency Medical Services System recognized Avery Dale as the 2015 EMS person of the year. Dale is pictured with his wife, Megan.

To better understand Dale, the public should know what makes Dale “tick,” according to a press release from Birmingham Regional Emergency Medical Services System.

Dale showed a passion for helping others at an early age as he would ride shotgun with his father, Kenneth Dale, a volunteer EMT-Paramedic, to calls, the release said.

“He would sit high in the seat with his red plastic fire helmet and flashing light from Radio Shack,” according to the release.

Dale later earned his Eagle Scout rank in high school. He joined the Verbena Fire Department in 2001 and became a full-time employee at Chilton County 911 in 2003.

Dale just could not get enough of helping others, so in 2010 he began working part-time with Care Ambulance, according to the release.

In 2014 Dale began volunteering with the Chilton County EMA office.

He is currently the rescue chief at Verbena as well as the information officer for the Chilton County Firefighter Association.

“His dedication, knowledge, kind heart and spirit are second to none,” the release stated. “He has a genuine desire for tending to the needs of Chilton County residents. No matter how big or small the problem, time of day or night or if he is on his 13th hour from one of his many jobs.”

Dale is the person that other EMS responders would want responding to their or their family’s emergency medical problem, the release said.

Dale received this EMS person of the year award at a ceremony in Pelham along with other awards from six other counties.

This award ceremony, sponsored by BREMSS, recognizes the best of the best each year. Dale is not the first Dale from Chilton County to receive this award. Kenneth Dale, also of Verbena, is known countywide for his dedication as a volunteer EMS person and has certainly been a role model for Dale, his son. Father/son relationships in EMS are rare and Chilton County is fortunate to have Dale and Kenneth ready, willing, and very able to respond to medical emergencies.

By Chanel Bingham | Special to the Advertiser A new generation of women across the globe are gathering together to... read more