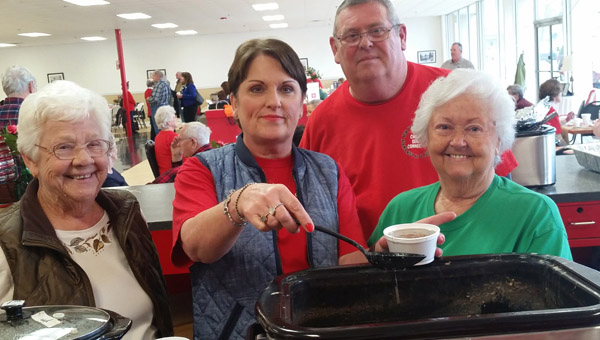 Senior Connection had a large crowd during its third annual Black Eye Pea Luncheon on Wednesday.

According to Senior Connection Coordinator Vanessa McKinney, the luncheon is one of the top fundraisers during the year, and a large portion of the proceeds will go toward a new electronic sign out in front of the plaza.

“We will pretty much have it paid for after next weekend,” McKinney said. “We hope to put it on the corner and run things on it for the city as well as parks and recreation.”

According to McKinney, the estimated number of people in attendance for the luncheon surpassed 250.

“Word’s getting out and this one definitely seemed like the biggest,” McKinney said.

The move to Senior Connection’s current location at Park Plaza in Clanton has opened the doors to hosting even more fundraising events similar to the Black Eye Pea Luncheon in the future.

“It was elbow-to-elbow when we were at the [city] rec center,” McKinney said. “People wouldn’t come because we were there and it was too tight.”

The lunch included black eye peas, cole slaw, cornbread and an assortment of homemade desserts. Each of the dishes was prepared by members of Senior Connection.

“This is absolutely awesome because it is a lifeline for so many people,” Senior Connection Treasurer Sammy Wyatt said. “This would be so good for the people that just sit at home and don’t know about it. It helps take their mind off of their ailments, because we’ve all got them.”

On top of the events, Senior Connection offers health education programs that include arthritis and weight exercises.

“We have more than doubled our membership since we opened our doors in September,” McKinney said. “It is the best thing to happen in Chilton County in a long time.”

Residents of Chilton County who are 55 years or older and interested in joining can visit Senior Connection at 304 Park Plaza in Clanton, fill out an application and pay a $20 fee for a year membership.