He was born in Garden City on March 14, 1916, the third of seven children of Lodusca Irene Dunman and James Monroe Higgins, who was a stationmaster for the L and N Railroad. 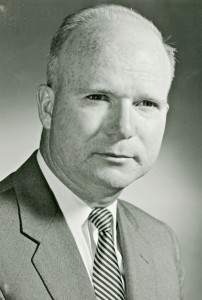 He was in high school when the family moved south to Thorsby, where he graduated from Thorsby Institute.

He worked for four years after high school to earn enough money to go into college and work his way through.

He received his B.S. from Bowling Green College in Kentucky and began his business career with General Shoe in Nashville, Tenn.

Milton had been in the Naval Reserve, and after the Pearl Harbor attack, he was called to the Navy for active duty. His duty as communications officer on the Battleship Arkansas included the Pacific as well as the invasion of Normandy on the French coast in 1944. It was while on liberty in New York on April 30, 1943, that on a blind date he met the love of his life, Helen Kindergan, and they married on March 12, 1944.

After the Navy and receiving his MBA and CPA from Northwestern University, they struck out for the West Coast in the first car either had ever owned and with everything they owned in the back seat.

The first job was CPA for a large company that grew carrots—owned by “the carrot king” who knew nothing about office procedure and very little English!

After two years of life next to the Mexican border, they moved back to “civilization” for a job with Hughes Aircraft, which lasted for the rest of his career. He enjoyed his work and didn’t retire until the age of 72.

He was a devoted family man was very proud of his three children, Sharron, Linda, and Keith.

The summer vacation each year was devoted to visiting the folks in Maine and Alabama and having them here for Christmas.

In retirement he loved to travel and those 26 years were blessed with continued good health to enjoy visiting distant places around the world. He was the epitome of a gentleman with his steady and calm demeanor.

His quiet presence and quick wit was loved by all.

We will miss him more than words can convey.

Services will be held at the Garden City Cemetery on Jan. 9 at 2 p.m.