A look back: Same-sex couple becomes first to wed in county 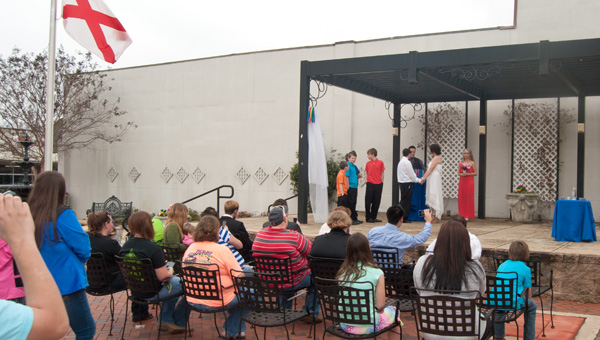 Below is the first installment of a four-part series looking back at the top news stories of 2015. This installment covers January through March. See future editions of The Clanton Advertiser for the rest of the year in review.

A former mayor of the town of Thorsby passed away Jan. 13 at the age of 68.

Samuel Thomas Bentley Jr., known to many as “Tom,” died at his home in Thorsby.

“I think anyone who knew Tom knew that he was passionate about the town of Thorsby,” current Thorsby Mayor Jean Nelson said. “He was a good leader. He was a smart man, and he did a lot of good for this town.”

Bentley was elected to serve the town as mayor in 2000 and served two terms (eight years).

Ed Prady, served as Thorsby’s Police Chief during Bentley’s time as mayor and remembered Bentley’s dedication to his job.

“He stood his ground on any decision,” Prady said. “That meant if he was for something, he would work until it was accomplished. One of the things he was most instrumental for in Thorsby was establishing the crossing guards at the railroad crossing. He worked so hard on that.”

Prady said Bentley also had the ability to stay “in-tune” with anything going on in the town.

“He always knew what was happening within the town,” Prady said. “There are a lot of mayors in larger towns who don’t always know what is going on in the city they work for, but Tom knew everything. In a small place like this, it is good for you to keep track of what is going on, and Tom was always aware of everything.”

Shearon sworn in as sheriff

In a packed courtroom at the Chilton County Courthouse on Jan. 20, John Shearon was officially sworn in as the new sheriff for Chilton County.

“I am incredibly humbled right now,” an emotional Shearon said after being sworn in and turning to face a crowd applauding him. “This means a great deal to me.”

Shearon was sworn in by Chilton County District Judge Rhonda Hardesty after 11 a.m., and then Hardesty re-deputized officers in the department.

“I am so proud to see this crowd,” Hardesty said before swearing Shearon in. “I don’t think I have ever seen so many people in this courtroom.”

Hardesty said she talked prior to the ceremony with Shearon and told him how “humbling” it is to know that people went to the polls to vote for him to serve as sheriff.

Shearon stood next to his wife, Lisa, and placed his left hand on a family Bible while he took his oath to be sheriff.

“My shoulders got a lot heavier this morning,” Shearon said. “We have a lot of work to do to make this department the best it can be, but if we all work together, we can make a difference.” 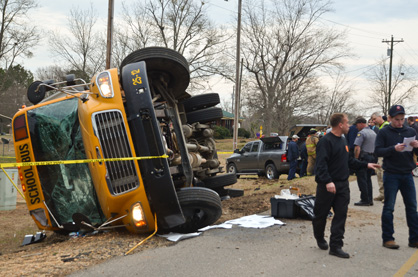 None of the injuries were considered critical, officials on the scene said, but the incident was still a scare for many.

Twenty-five Clanton Elementary and Clanton Intermediate students and a driver were on Bus No. 25-12 when it overturned Thursday afternoon while traveling on Enterprise Road.

Bus passengers who didn’t have to be transported for medical treatment were loaded onto a different bus and taken to meet their concerned parents at Clara’s Cafe, where they were close enough to be able to see emergency responders as they worked at the scene.

Parents and others close to the students waited anxiously in the Clara’s parking lot, and hugged their children when they were dropped off.

The Langstons were among those who could breathe a sigh of relief and give thanks.

Connor Langston said he wasn’t frightened during a bus ride that he won’t soon forget.

“We just rolled over, and the all the windows crashed,” he said and added that he got to sit on a fire truck afterward.

A memorial service was held Jan. 30 in Clanton to honor three individuals who died in a car crash on Jan. 24.

Robert Paul Gallet, 50, Damian Lee Gallet, 23, and Devan Jerica Gallet, 21, all of Billingsley, were remembered by friends and family at Martin’s Funeral Home in Clanton.

“There is nothing in this type of situation that will give you the appropriate words,” Pastor Tony Smitherman said. “We have all gathered here today because you had a connection with these individuals. Whether you are a family member, a friend, a coach or a fellow student, you have special memories of these people.”

The Gallets were passengers in a vehicle, that collided head-on with a vehicle on Highway 22 at County Road 516, seven miles south of Clanton, on Saturday at 1:15 p.m.

All five individuals involved in the crash were killed.

The first same-sex couple to be married in Chilton County held a ceremony Feb. 9 amid confusion about the status of gay marriages in Alabama.

“We are setting a milestone today for everyone who loves one another,” Racheal Higgins said.

Higgins, from Clanton, and her partner Amanda Bone, from Autauga County, arrived at the Chilton County Courthouse before 8 a.m. to apply for their marriage license.

The Chilton County Probate Office issued the license to the couple but stopped issuing marriage licenses to same-sex couples shortly after, due to an order by Alabama Supreme Court Chief Justice Roy Moore.

The license issued to Higgins and Bone was the only one issued to a same-sex couple Feb. 9.

“We have stopped issuing them right now because we are waiting to see how we should proceed,” Probate Judge Bobby Martin said. “We aren’t really sure what is going on right now. It is complete confusion.”

A stay was issued on Granade’s ruling that put the ruling on hold until Feb. 9.

Moore issued an order late Feb. 8 stating that all probate judges and employees in Alabama must follow existing state law and not issue marriage licenses to same-sex couples or recognize same-sex marriages.

The dispute left Martin’s office unsure of what to do.

“Until we receive another court order, we will not be issuing marriage licenses to same-sex couples,” Martin said.

Martin said due to Alabama recognizing marriage as being between a man and a woman, it was his understanding that heterosexual couples could still apply for marriage licenses.

Gov. Robert Bentley issued a statement Feb. 9 saying the issue of same-sex marriage would be decided by the U.S. Supreme Court later this year.

“I have great respect for the legal process, and the protections that the law provides for our people. I am disappointed that a single federal court judge disregarded the vote of the Alabama people to define marriage as between a man and woman,” Bentley said in a release.

Bentley said the issue has created “confusion” with conflicting direction for probate judges in Alabama.

“Probate judges have a unique responsibility in our state, and I support them,” Bentley said. “I will not take any action against probate judges, which would only serve to further complicate this issue. We will follow the rule of the law in Alabama, and allow the issue of same-sex marriage to be worked out through the proper legal channels.”

Meanwhile, Higgins and Bone spent the morning preparing for their wedding ceremony that was held across the street from the Chilton County Courthouse, at Clanton Downtown Corner Park, with about 25 friends and family, including Higgins’ four sons.

An incident in Chilton County on March 4 led to the arrest of a Calera man facing rape and sodomy charges.

Barry S. Walsh, 28, who lists an address in Calera, was originally arrested by the Calera Police Department after allegedly brandishing an assault rifle and threatening Chilton County Sheriff’s deputies who arrived at his home as part of an investigation the morning of March 4, Chilton County Sheriff John Shearon said.

Although no shots were fired when Walsh appeared before the deputies with an “assault rifle,” Shearon said there was about a 30-to 45-minute standoff.

“It could have been really bad,” Shearon said. “He kept swinging the gun around and making threats.”

City of Clanton named in lawsuit against private probation company

The city of Clanton is named along with a private probation company in a lawsuit filed March 12 by the Southern Poverty Law Center, alleging a “racketeering scheme” exists in the city’s court system.

The suit accuses Judicial Correction Services, which has an office in Jemison and operates in about 100 municipalities in Alabama, of violating the federal Racketeer Influenced and Corrupt Organizations Act by extorting from probationers monthly payments that include fees for the company, including a $10 set-up fee and $40 monthly fee.

The city is named in the suit because of an “illegal contract that violates Alabama law prohibiting the charging of a probation fee in city court,” according to an SPLC press release.

“Judicial Correction Services is extorting people for its own profit, pure and simple,” Sam Brooke, SPLC staff attorney, said in the release. “With JCS, Clanton has created a two-tiered system of justice: one where people of means pay and go, and another where low-income and working-class people get trapped for months or years in a nightmarish scheme. The company has manipulated the court system to extort money from poor people in Alabama by threatening them with jail.”

Clanton, along with many other municipalities, later ended its contract with JCS and was dropped from the lawsuit.

An enrollment freeze on Thorsby School was lifted March 17.

The Chilton County Board of Education voted in favor of the measure, which was recommended by Superintendent Tommy Glasscock.

The “freeze” had been in effect a couple of times in the last several years as the town deals with a growing population, while the school system hasn’t had funds available to build a new school.

The freeze pertained only to students from outside Thorsby who wanted to enroll at the school. Thorsby residents have not been kept from attending the school.

The Chilton County school system does not have school zones.

Still, Glasscock said he had heard from town officials that the freeze had a negative effect.

“The community felt like it created a perception that we’re not going to grow,” Glasscock said.

Glasscock said the school is designed to handle 800-850 students, but enrollment grew to over 900.

“When we got to that threshhold, we had to do something,” he said about the freezes being put in place. “You have to applaud [Principal Russ] Bryan and Thorsby because people want to go there.”

Shoney’s and the adjacent Inn of Clanton reopened March 16 after being closed since December 2014.

“We are just so glad to be back,” owner Beverly Baker said. “We are truly blessed.”

Beverly and her husband Curtis Baker opened the businesses originally and have recently acquired them after a bankruptcy case involving the former operator forced a temporary closure of the popular local eatery and Inn.

Now, the Bakers are looking forward to a fresh start and are happy to be open to the community.

A wreck early Christmas morning claimed the life of a 40-year-old Clanton woman and two of her children. The vehicle... read more