Verbena boys have yet to lose

With a 57-39 win over the visiting Isabella Mustangs on Friday night, the undefeated Verbena Red Devils varsity boys basketball team took a 9-0 record to the Christmas break. 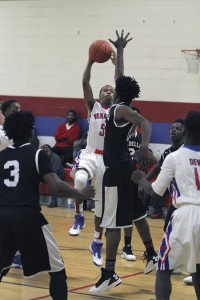 Jaqarise Stacy put the first points of the game on the board for Isabella, but Dorrian Parker followed with a basket to tie the game at two while starting a 10-0 run by Verbena which gave the Red Devils a 10-2 lead.

Cornelius Stacy ended the Red Devils’ run but was answered with a basket by Juwan Tyus.

Ryan Headley and Jarred Campbell combined for baskets for Isabella.

Parker once again knocked down a basket that started an 8-2 run that gave Verbena a 23-10 lead at the end of the first quarter.

Austin Brasher opened the second period with a basket for the Mustangs but was quickly answered by a three-pointer from Anthony Miller.

Two baskets by Hakeem Underwood and two by Miller aided in a 12-0 run by the Red Devils to close out the first half with Verbena leading 40-14.

Stacy started the third quarter with a basket for the Mustangs but was answered by a basket from Underwood.

The theme continued throughout the period as the teams traded points.

The Red Devils maintained a 53-27 lead going into the final period of play.

Baskets by Stacy and Campbell of Isabella and a basket by Miller of Verbena brought the score to 55-30 in favor of the Red Devils.

Campbell and Christopher Headley exchanged baskets, and another basket from Campbell started a 7-0 run by the Mustangs that came a little too late as the run ended with the game-ending buzzer to give the Red Devils a 57-39 victory.

Stacy finished with a double-double to lead the Mustangs with 10 points, 11 rebounds and six steals.

By Brandon Sumrall | Special to the Advertiser Verbena’s girls varsity squad was not as lucky as the boys team... read more