Maplesville trains to be prepared for the worst 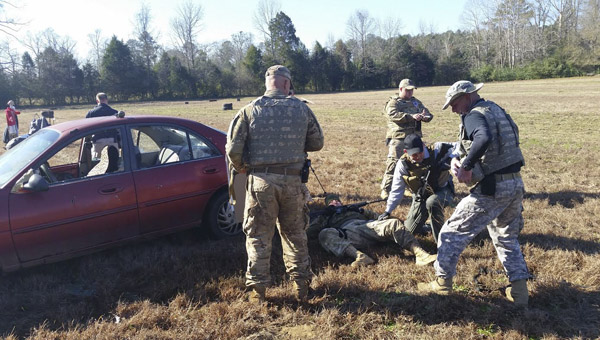 Keith Avery goes through the process of providing medical aid to Josh Hubbard (ground) as Todd Ingram and Kenneth Casey observe during a portion of a training exercise. (Photo by Anthony Richards / Advertiser)

The Maplesville Police Department performed a live-fire training exercise on Friday. It was designed to prepare officers for the circumstances that would surround an attempted terrorist attack.

“It doesn’t get any better than live-fire training,” Maplesville police officer Josh Hammond said. “When you’re taking and returning fire, the battlefield can become very confusing. The more we expose ourselves to this training, the better [officers] will be if an actual situation comes up.”

The drill began at Maplesville High School under the premise that terrorists were targeting the school. The objective led the assault team comprised of four officers to the property of Police Chief Todd Ingram, where the final phase of the initiative was completed.

“We trained them back at the school and went over the mission repetitively with some rehearsals,” Ingram said. “Once we kicked off the operation, everything went pretty smooth. When it comes to the mindset, you’ve got to switch from police to infantry because you can’t approach it the same way.”

The assault team consisted of Ingram, Keith Avery, Josh Hubbard and Kenneth Casey acting as the leader of the unit.

Ingram, Casey and Hammond are all military veterans and have spent time in the Middle East. Their background has spurred such exercises in the past and will continue moving forward.

“This is great training, and it is led by some guys that know exactly what you would have to go through,” Maplesville police officer Josh Hubbard said. “These are scenarios that can happen and we won’t take lightly. A lot of us grew up here and we’ll do what we can to protect the citizens.”

The private property was transformed into a shooting range that included smoke from a fire pit and two motor vehicles that served as props during the demonstration.

“We took a quick route that was very specific for our safety,” Hubbard said. “The steps that we took to isolate a problem were extremely necessary.”

Recent events throughout the nation and the world have heightened the sense of awareness throughout various communities. If anything, the town of Maplesville should feel much relief that their police department is taking the process of looking out for the people’s well being.

“Who knows if it’s going to happen in Chilton County, but it is better to go ahead and start getting a team working together,” Ingram said. “If something was to happen, we would have to take charge.”

According to Hammond, the need for this kind of training is becoming more and more important due to the increased challenges that face law enforcement today. The live fire presents a more accelerated form of training designed to mimic the psychological and physiological stresses.

“It is unique to our area, but we do this kind of training pretty regularly,” Hammond said. “It can be anything from a terrorist situation to a simulated traffic stop in which we are being fired at from the vehicle that we pull over. It would definitely give me some relief if I was a citizen.”

Variety store: Many different kinds of items can be found for sale at the flea market, which is open 8... read more