Verbena and Billingsley duel on hardwood

The Verbena Red Devils varsity boys basketball team continued their unblemished season and improved to 8-0 on Monday night with a 73-50 win over the Billingsley Bears.

Quandarius Tripp tied the game at four, while two free throws by Juwan Tyus began a 9-0 run by the Red Devils that was stopped by a Danny Jefferson basket to make the score 13-6 in favor of Verbena. 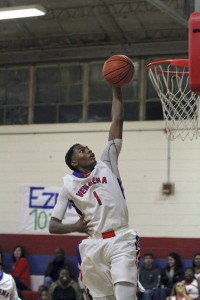 Verbena’s Juwan Tyus flys high above the rim on his way to a dunk. (Photos by Brandon Sumrall / Special)

Tyus answered with four consecutive points, topped off by a three-pointer from Jacob Cleckler to give Verbena a 20-14 lead at the end of the first quarter.

Tyus and Raymond Bulger of Verbena combined to start the second half with a 5-2 run.

Anthony Miller drained a basket for the Red Devils that was answered by Billingsley on a Mathew Snow three-pointer.

However, Tyus quickly matched with a three of his own to give Verbena a 32-19 lead.

Hakeem Underwood sank a basket with 2:58 to play that started a 6-3 Red Devils run to send the game to the half with Verbena leading 40-22.

Larry Starks opened the second half scoring by sinking a three-pointer for the Bears, but a basket from Dorrian Parker provided that the Red Devils’ lead remained at 18. Both teams went blow-for-blow during the third period, as thunderous dunks by both Tyus and Underwood brought the Red Devil faithful to their feet and sent Verbena to the final period with a 62-44 lead.

Baskets by Alex Cobb and Snow were answered by Parker, but it was two free throws by Parker that started a 6-0 run by Verbena that was put to an end by a basket from James Barnett.

Christian Blauch sank one of two free throws with 32 seconds left to play to bring the game to its final outcome.

Tyus led the Red Devils with 30 points, 13 rebounds, two steals and a pair of blocks.

The Bears were led by Green, who picked up 19 points, 10 rebounds and one steal.

Verbena’s girls squad was not as fortunate, as a late game comeback fell just short and the Red Devils suffered a 49-39 loss to visiting Billingsley.

With just over a minute into the game and with the two teams tied, a three-point basket from MacKenzie Glass gave the Bears a lead that they never relinquished. Another Glass three extended the Bears’ lead to six, and two more baskets gave Billingsley a 13-5 lead at the end of the first quarter.

Glass started the second quarter much the way she ended the first¬–with another basket from behind the arc.

A basket by Tashanna Parker was answered by Makayla Mims but left the Red Devils trailing 18-7. 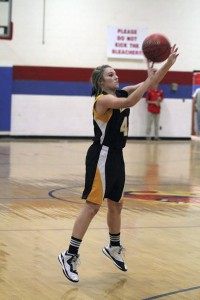 MacKenzie Glass aims the ball as she shoots a three-pointer.

Megan Barrett and Carissa Hall added baskets for the Red Devils, but another Glass three-pointer sent Billingsley to the locker room with a 25-10 halftime lead.

Four straight points from Monica Blauch to start the third period began an 8-0 Red Devils run that was ended by a basket from Parker that brought the score to 27-20.

Another basket from Parker started a 9-0 Bears run that would finally end on a three-pointer from Barrett.

However, Billingsley maintained a 39-28 lead at the end of the third quarter.

A free throw by Mims ignited a 7-0 run by Verbena and drew the Red Devils to within four.

That would be the closest the Red Devils could get, as the Bears ended the game on a 4-0 run to take home a 49-39 win.

Glass led the Bears with 16 points, including four-of-eight from three-point range, six rebounds and one steal.

Verbena boys basketball (7-0) earned a 47-26 road victory over Isabella on Friday. The victory was the Red Devils’ second... read more