Nichols was born in Sprott. He served in the U.S. Army and completed a bachelor of science in political science at University of Alabama before moving to Maryland. 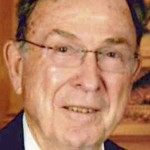 Nichols had an avid interest in serving the public and in 1968 was elected to the Howard County Council.

For a short time in 1986, Nichols was a candidate for the Maryland State Governor. In 1986, Nichols took a position with a utility conglomerate, Entergy, in New Orleans, La.

In the 1990s, Nichol’s interest took him abroad to work on a free market plan in Poland.

He then spent many years working with the firm of Mendez England Associates dispensing economic development plans in Eastern Europe, predominately Albania where he established many lasting friendships before retiring to his home in Maplesville.

In addition to his other accomplishments, he served as the Maryland Deputy Secretary for State Budget and Planning.

Nichols helped form the Maryland State Lottery in the 1970s and served on the initial Lottery Board of Louisiana in the 1990s.

Friends will be received from 5-7 p.m., Dec. 10 at Martin Funeral Home in Clanton. Services will be held Dec. 11 at 11 a.m. at Cox Chapel United Methodist Church with the Rev. Stanley Carter officiating.

In lieu of flowers, please donate to the Maplesville Volunteer Fire Department.

Evelyn Brand McGuire, 87, of Clanton, passed away on Dec. 8 at her residence. She was born in Clanton on... read more