The Thorsby Rebels varsity boys basketball team improved to 5-2 on the season with a 83-38 win on the road against cross county rival Isabella (0-5) on Dec. 4.

Cornelius Stacy put the Mustangs on the board first by starting the game with an old fashioned three-point play, but back-to-back baskets by Calvin Plyer gave Thorsby a two-point lead. 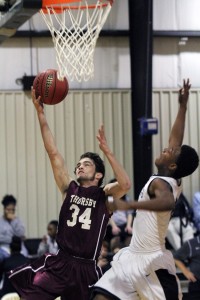 Thorsby’s Ben Thornton goes up for a layup with Isabella’s Cornelius Stacy in hot pursuit. (photo by Brandon Sumrall / Special)

With the game tied at six and 4:34 to play in the first quarter, a basket by Bradley Stange started a 10-0 run by Thorsby to make the score 16-6 in favor of the Rebels.

Jaqarise Stacy dropped two free throws and added another basket to cut the lead to six, but a 4-1 run by Thorsby to end the first period gave the Rebels a 20-11 lead.

Seven points from Michael Fortner aided in a 12-point run by Thorsby that was finally ended on a basket by Stacy that brought the score to 35-14 midway through the second.

With 1:55 to play in the half, Fortner once again accounted for seven points for the Rebels with a three-pointer and two more baskets to lead a 7-2 run that gave Thorsby a 53-25 lead at the half.

The two teams exchanged baskets through the 4:02 mark of the third quarter, but with Thorsby leading 58-30, a free throw by Stange ignited an 11-2 run and made the score 70-32 at the end of three periods.

Jordan Campbell sank a pair of baskets for the Mustangs to start the fourth quarter that would be answered with dual baskets by Dylan Carroll.

Carroll’s six points in the period accounted for half of the Rebel offense in the final period, as Thorsby went on to easily knock off the Mustangs.

The Rebels out-shot the Mustangs 52 percent to 30 percent from the floor, while Fortner lead the Rebels with 19 points, seven rebounds, two steals and a block.