The Jemison Panthers played host to a Thanksgiving basketball tournament, and what better way to spend the holidays then by winning games. The boys team grabbed a pair of victories including a 55-29 win over West Blocton on Monday night.

It was the Panthers second win against West Blocton this season. Jemison won both games by a 26-point margin. Throughout the young season, the Panthers have shown a tendency for comfortable victories.

The defense forced 21 steals against West Blocton, as nine different players finished the game with a takeaway. Wes McGehee and senior Mathew Ramsey led the way with four steals each. 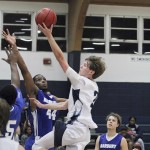 Jemison’s Wesley McGehee (No. 2) has his sights on a score as he flies down the lane. (Photos by Brandon Sumrall)

On top of his stellar defensive performance, McGehee tallied a game-high nine points on the offensive end of the court. Ryan Thompson followed close behind with eight points.

Kris Harris posted a team-high six rebounds to accompany a pair of blocked shots. His awareness on the defensive end was on display.

The girls were also victorious on Monday with a 37-24 defeat of West Blocton. Karmen Mims fueled the win by knocking down four shots from long range.

The tournament began Saturday, as the boys and girls varsity squads split games against the Marbury Bulldogs with the girls losing 48-47 while the boys picked up a 67-60 win.

Turnovers cost the Panther girls heavily in the first period, as a basket by Kiara Steele and Cassani Steele were the only points for Jemison. Marbury had a 12-4 lead through the first period.

Consecutive baskets by Cassani Steele to start the second period drew the Panthers to within six, and an Averie Porter basket made the score 14-10 early in the period.

Two free throws by Steele cut the Bulldog lead to two, but a nine-point Marbury run put the Bulldogs up 23-12.

Mims drained a three, and a basket from Kiara Steele along with a free throw by Maria Flores brought the score to 25-18 in favor of the Bulldogs.

With 3:51 to play in the third period and the Bulldogs leading 30-20, the Panthers began to chip away starting with a 4-1 run to pull to within six.

The Bulldogs worked their lead to 13 with 1:18 to play when a five-point run lead by Zanquese Johnson and Mims brought the score to 38-31 at the end of third.

A free throw by Flores with 6:52 left in the final period kicked off an 8-1 Panthers run to pull Jemison to within one at 41-40 with 2:52 to play. Two consecutive Bulldog baskets extended the lead to five.

However, baskets by Kiara Steele and Johnson made the score 46-44. With 28 seconds left to play, a basket by Cassani Steele tied the game at 46, but a basket by N’Seya Morissette gave Marbury the lead back by one. 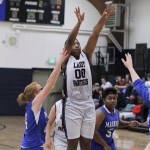 Jemison’s Cassani Steele (No. 00) shoots a jump shot with a host of Marbury defenders bearing down.

Johnson sank one of two free throws with eight seconds to play to cut the lead to one, but the Bulldogs managed to hold on for the win.

The Jemison varsity boys got off to a bit of a slow start as the Bulldogs started the game with a 13-3 run. Baskets by Tremon Bryant, Ryan Thompson, and two by Wesley McGehee drew Jemison to within three at 14-11.

A 5-0 Marbury run was answered by a three-point play by James Leachman, which brought the score to 19-14 at the end of the first period.

The momentum shifted heavily in favor of Jemison in the second period, as a four-for-five performance from behind the arc led to the Panthers outscoring the Bulldogs 26-14 in the period.

With the Bulldogs leading 23-17, a basket by Thompson and a three by Christian Hood led to a lead-changing three pointer by William Johns that gave Jemison their first lead of the game.

Another three by Hood along with one by Robert Evans would lead to the Panthers taking a 40-33 lead to the half.

An 8-3 run by the Bulldogs to start the third period drew Marbury to within two points before a three-pointer and a two from Bryant grew the Panther lead to seven.

A 10-4 run by the Bulldogs to end the third period made the score 52-51 in favor of the Panthers.

The two teams swapped the lead multiple times through the early minutes of the fourth period before a basket by Mason Jones started an 8-0 Jemison run that gave the Panthers a 63-55 lead with 1:43 to play.

The Bulldogs managed to cut the Panthers’ lead to four with 28 seconds to play, but a free throw and basket by Evans brought the game to its final score of 67-60, as the Panthers picked up an opening round win.

Leachman led the Panthers with 13 points and three rebounds while Thompson added 12 points and five rebounds for Jemison.

The Thorsby girls varsity basketball team could not have opened the season with more momentum than it has currently created.... read more