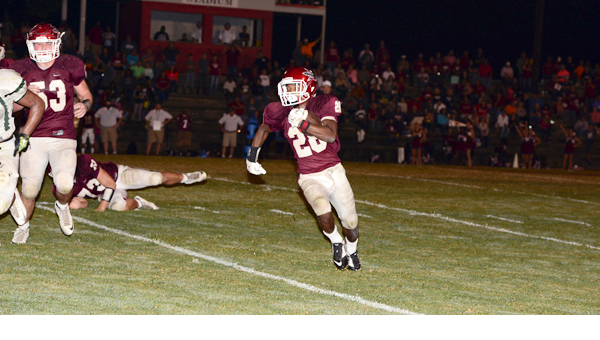 The second round of the state football playoffs continues Friday with Verbena and Billingsley each hosting a game while defending champion Maplesville goes on the road.

Each game is expected to be a battle, as the competition strengthens with each week that passes. Each of the three opponents was ranked in the top five by the AHSAA at the end of the regular season.

All three teams proved that they belong in the postseason with statement victories a week ago. Confidence is high among both players and fans as a state title becomes closer to a reality.

After years of anticipating its next postseason appearance, Verbena (8-3) now looks to win its second straight playoff game as the Red Devils host Brantley (9-2).

Throughout the regular season, it was the offense that garnered a lot of attention. However, the defense proved just as formidable of a unit during its first round victory over J.U. Blacksher.

Defense is known to win championships and Verbena hopes that continues to be the case moving forward. Trey McCullough and Anthony Miller lead the way as a dynamic duo that has averaged double-digit tackles per game. 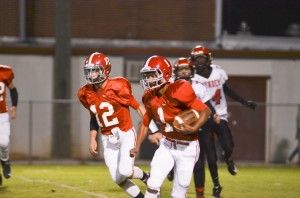 Dorrian Parker and Tristan Short have had opposing defenses on its heels throughout the season.
(PHOTO CREDIT: FILE)

The Red Devils continually present problems for opposing defenses with a balanced offensive attack that features an abundant amount of options.

Dorrian Parker and Hakeem Underwood pile up the yards on the ground while Tristan Short and Juwan Tyus present a lethal combination in the passing game.

For Billingsley, it was all about offense during its 53-28 first round win over Millry. Primarily led by its ground game that was fueled by Derrick Dunigan who accounted for five rushing touchdowns.

The Bears have a different team makeup from the squad that made a title run a year ago. However, this has not simmered expectations for the Billingsley faithful as it welcomes Georgiana for a second round matchup.

This will be the first ever gridiron meeting between the two Class 1A schools. If Billingsley wins, it could set up a possible quarterfinal showdown against nearby rival Maplesville.

In order for that enticing matchup to take place, both teams must handle the task at hand this Friday. That would include a Maplesville victory on the road against Marengo in Dixons Mills.

The Red Devils are once again a perennial contender and have made a routine of deep trips through the playoffs in recent seasons.

Maplesville’s success stems from postseason experience and an array of impactful players on both sides of the ball. 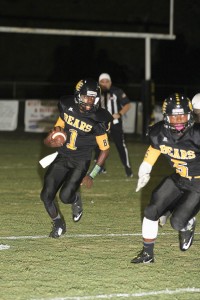 Larry Starks looks for a block from Derrick Dunigan earlier in the season. The ground game has asserted itself in recent weeks.
(PHOTO CREDIT: FILE)

Offensively, Terence Dunlap is one of the best in the area at running the ball. Seniors are key cogs in an explosive aerial attack with quarterback Cole Spencer and wide receivers Nathaniel Watson and Trevor Wallace.

Watson is a proven deep threat with an average of well over 20 yards per reception. When he hauls in a pass, it is normally demoralizing to a secondary.

The defense is a complete unit that frustrates opposing coordinators with its versatile approach. Trey Mixon and Corey Hall provide the pressure while Jerry Nix III erases big plays in the secondary.

It has been an exhilarating time throughout the communities of Maplesville, Verbena and Billingsley. As is the case, any time a football team remains in the hunt well into November.

There is something about football that captures the emotions of everyone involved. Each team looks to ride this wave of emotion into the quarterfinals.

Verbena (8-3) was back in the postseason after eight seasons and made the most of it with a 21-13 first... read more