Maplesville cruises through first round 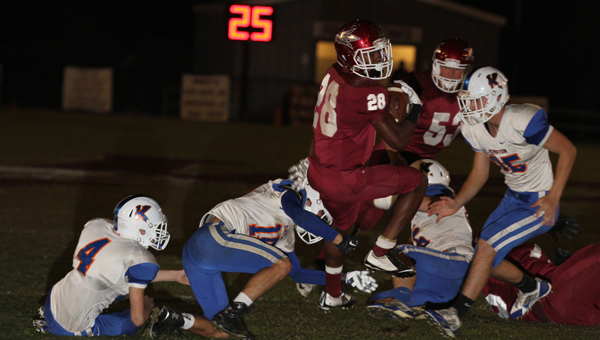 Terence Dunlap gets spun around while trying to reach the end zone. (Photo by Brandon Sumrall)

Maplesville took the first step in its quest to repeat as Class 1A state champions by defeating Kinston 49-12 to advance to the second round of the playoffs.

After a somewhat sluggish start by Maplesville standards, the Red Devils eventually found their footing and cruised to victory for much of the second half following a 35-12 halftime lead.

“Our kids have experience in the playoffs and the approach hasn’t changed over the years,” Maplesville head coach Brent Hubbert said. “They know the steps and what they’ve got to do.”

The offense moved the ball at will but was unable to convert into points early on in the game. That all changed after the Maplesville defense sniffed out a fake punt around midfield.

One play later, Terence Dunlap made it count with a 52-yard touchdown run that carved through the heart of the Kinston defense. Quarterback Nicholas Spencer called his own number on a successful two-point conversion that extended the Red Devils’ lead 28-12 midway through the second quarter.

On its next offensive possession, Nathaniel Watson took a handoff around left end and outran the defense 66 yards, which gave Maplesville a three-possession lead entering halftime.

“By the time we came out at halftime everything started clicking,” senior linebacker Corey Hall said. “Hopefully next week we’ll be full speed for 48 minutes [entire game].”

The second half began much like the first half ended, with a scoring drive for the Red Devils. Dunlap punched it in from a yard out to increase the lead 42-12 on his fourth touchdown run of the night.

“Terence [Dunlap] just contined to do what he has done for us all year,” Hubbert said. “Our offensive line blocked well. Execution was a big part.”

The defense took it from there and pitched a shutout in the second half. Timothy Bradley finished with a fumble while Michael Harris had a late-game interception.

“We felt good about our defense all week, and they took them [Kinston] out of their game plan,” Brent Hubbert said.

FOOTBALL PLAYOFFS PREVIEW: And then there were four

The playoffs are upon us, and four teams remain from the Chilton County area. Maplesville (8-1 overall, 4-0 region) is... read more