Officials commit to working together on child abuse cases 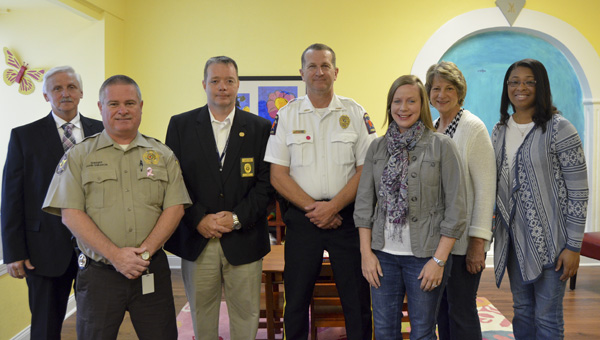 Several local officials came together Friday morning to renew their commitment to working together in county child abuse investigations.

The event was held at the office of Butterfly Bridge Children’s Advocacy Center.

“This is just a time where we put it in writing that we will work together,” said Jana Zuelzke, executive director and child forensic interview specialist at Butterfly Bridge.

The local multi-disciplinary team’s mission is to “cooperate in a collaborative approach to cases involving child victims in order to facilitate strong case development and reduce the amount of trauma on the child victim.”

Police chiefs from Clanton, Jemison, Maplesville and Thorsby, and the Chilton County sheriff, representatives from the District Attorney’s office and Chilton County DHR were some of the entities signing a form stating their commitment to continue working together.

“It takes all of us working together,” Zuelzke said.

During the 2014-2015 Fiscal Year, Butterfly Bridge conducted 127 interviews with 113 children and adolescents at the request of local law enforcement and the Department of Human Resources.

There were 13 multi-disciplinary child abuse case review meetings and there were 412 case reviews at those meetings, which were coordinated by Butterfly Bridge staff.

Zuelzke said there were also 392 advocacy services to include advocacy at the time of the forensic interview, extensive follow-up and referrals for each family, court preparation and accompaniment, parent support sessions and sentencing accompaniment.

The overall total of services provided for the 2014-2015 Fiscal Year included 1,258, which was an increase from the previous fiscal year of 1,169 services.

To learn more about Butterfly Bridge, visit www.butterflybridgecac.org or call (205) 755-4205.

On Wednesday, Jalyn Gibson and Wes Presley stopped by the Chilton County Probate Office to apply for their marriage license.... read more