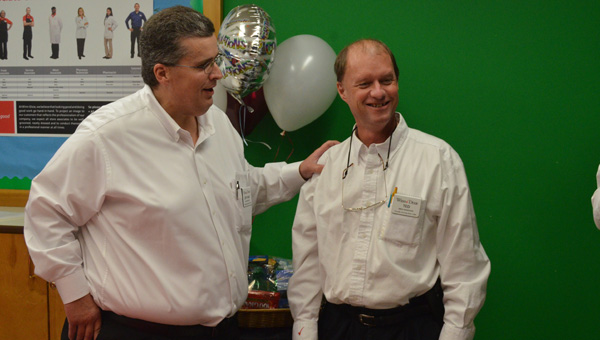 Clanton Winn-Dixie Store Director Jeff Wax thanks Ted Bamberg for his work in the grocery business. Bamberg has been employed with Winn-Dixie for 35 years. (Photos by Emily Reed)

Winn-Dixie employee Ted Bamberg could be described as the face of the Clanton grocery store.

“When people come in to the store, they know Ted,” store director Jeff Wax said. “If people don’t see him immediately, they will go find him. They just love interacting with him. He has a knack for people.”

Bamberg is the store’s service area manager and has been employed with Winn-Dixie grocery stores for 35 years.

Bamberg celebrated his milestone on Friday with a surprise celebration thrown in his honor by coworkers at the store. 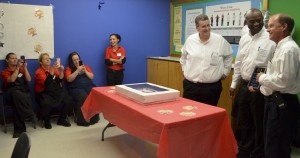 Bamberg celebrated his milestone with a surprise celebration thrown in his honor by coworkers at the store.

“I really have never known anything else,” Bamberg said. “This was my first job, and I have stuck with it throughout the years.”

His dedication to the job started as a teenager when he was employed working for his parents who owned a small grocery store in Titus.

After working for his parents, Bamberg applied for his first “real” job at a Winn-Dixie grocery store in Wetumpka.

“I went in and applied the old school way where you had to fill out a piece of paper on a clipboard,” Bamberg said. “When I started, I punched a paper time clock and I wore a tie and an apron every day.”

Bamberg’s first role at Winn-Dixie was as a “bagger,” where he was then promoted to cashier and started working full-time on a night stop crew for more than three years.

Bamberg was promoted to working produce when he met his wife, Ann, who was a cashier at Winn-Dixie while going to nursing school.

“I have definitely worked it all,” Bamberg said.

Bamberg has worked at several Winn-Dixie stores during his time with the company and started working in Clanton two years ago.

“The customers are what I enjoy most about the job,” Bamberg said. “They come in here and tell me about their lives, and I interact with them. I just enjoy it.”

Wax said there are times when Bamberg grills outside of the store’s entrance, and customers look forward to seeing Bamberg cooking.

“He really cuts up with the customers when he is at the grill,” Wax said. “They just love him.”

Helen Binion has worked with Bamberg at the Clanton location and said he has been a “wonderful” person to work with.

“He never seems to have a bad day,” Binion said. “He is always doing his job and enjoying it.”

Wax said Bamberg often goes above and beyond what is asked of him, and is thankful for Bamberg’s dedication to the job.

“It is very rare these days to find someone who has been employed with the same job for so long,” Wax said. “People like to see a friendly face when they come grocery shopping, and we are lucky to have him.”

Officials commit to working together on child abuse cases