Rebels fade in second half, lose to Verbena 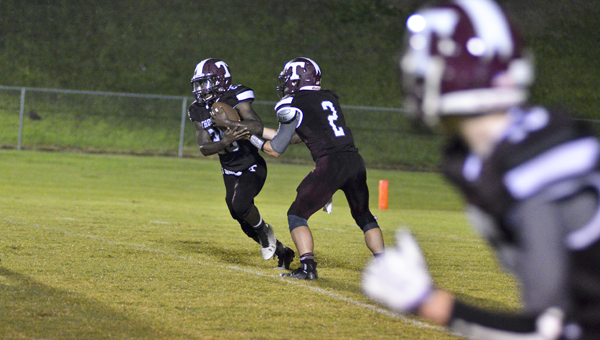 Hand off: Thorsby quarterback Conner McRae (No. 2) hands off to Terrell Davis on Friday. (Photo by Stephen Dawkins)

There’s nothing quite like starting off a season with a win over your rivals.

But while Verbena celebrated Friday’s 27-8 win at Thorsby, the Red Devils hope it’s the start of something more.

“We’ve got a chance to be good, but it’s going to take hard work,” VHS coach Mike Harris told his players after the game.
The Devils overcame a 45-minute delay to start the game because of lightning, soggy field conditions and a slow start to earn the win with a dominant second half.
Hakeem Underwood gave visiting Verbena an early lead at Susan Bentley Field with a touchdown run. Anthony Miller’s point-after made the score 7-0, but the Devils wouldn’t score again until the third quarter.
In the meantime, the teams traded punts until Thorsby (1-1) took possession with time winding down in the first half.
The Rebels leaned heavily on the running of juniors Ken Mims, Kevin Mims and Terrell Davis–numbers 23, 24 and 25–and the trio finally started finding some space.
Senior Dylan Carroll also got in on the fun, carrying the ball to Verbena’s 6-yard line, where Thorsby took a time out to stop the clock.
Kevin Mims then ran around the right side and found the pylon in the front corner of the end zone as he was being hit to put the Rebels on the board.
Quarterback Conner McRae kept the ball and ran in for a 2-point conversion, stretching for the goal line as he was being tackled, to give the hosts an 8-7 lead at halftime.
Thorsby looked to continue its success on the ground in the second half, but after a couple of first downs, the Verbena defense stiffened and forced a turnover on downs.
Harris said the coaching staff made an adjustment at halftime, and the Verbena defense shifted back into its base formation. The change worked well enough to keep Thorsby off the scoreboard in the second half.
The Verbena offense reclaimed the lead on a 60-yard run by Dorrian Parker that was set up by an Underwood carry to convert a a third down play.
Miller was good on the extra point, and the score was 14-8.
Quarterback Tristan Short found Juwan Tyus for a couple of long gains on Verbena’s next possession, but penalties for a false start and holding helped stall the Devils, who turned ball over on downs at Thorsby’s 12-yard line.
The Rebels offense couldn’t flip field position, punting the ball away, but the defense almost did when Ken Mims appeared to have recovered a fumble.
The ball was given back to Verbena, which then capitalized with a 70-yard scoring strike from Short to Tyus on a slant across the middle of the field.
The point after was missed, but Verbena held a 20-8 lead.
Thorsby tried to manufacture a big play on its ensuing possession, but Miller sacked the Rebels quarterback on an attempted double-reverse pass, leading to a turnover on downs.
After a couple of clock-draining first downs, Verbena added another touchdown when Short rolled to his right, tucked the ball and scored from 10 yards out. Miller added the extra point.
Verbena senior Jacob Cleckler said the team’s conditioning allowed it go from a halftime deficit to a convincing win.
“We just had to come out here and get the job done,” Cleckler said.
Both teams begin region play next week. Thorsby hosts Pickens County, while Verbena will host Autaugaville.