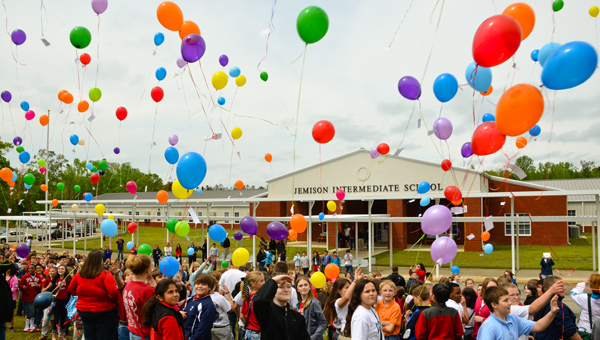 Up and away: Jemison Middle School students wrote messages to their late classmate Christopher Rico and tied them to balloons that were released at the school.

Editor’s note: Below is the first part of a three-part series looking back at the top news stories of 2013. This installment covers January through April. Look for the second installment in the combined New Year’s edition.

Ann Campbell was sentenced Jan. 3 to 30 years in prison for murdering one of her sons and 20 years for attempted murder of another.

Campbell previously pleaded guilty Dec. 13, 2012, for murdering her 11-year-old son Michael Campbell and attempting to murder another son, Bailey Mays, who was 15 at the time.

Several relatives who were present at the sentencing asked Campbell why she shot her sons, while some reassured Campbell she was a good mother leading up to the incident while echoing the statement that questions needed to be answered.

Campbell hung her head and said she was sorry but that she didn’t “choose” what happened.

“I can’t explain something I don’t understand,” Campbell said.

Campbell was arrested and charged after a June 2011 incident in her home in the Enterprise community where Campbell was found seated on her sofa in her mobile home, about eight feet away from her son, Michael Campbell, who lay dying from three shots from a .22 bolt-action rifle, according to prior testimony.

Campbell’s other son, Bailey Mays, was also shot but fled to a relative’s house on the same piece of property off County Road 69.

Mays later told officers he was asleep on the couch in the living room when he heard gunshots and saw Michael Campbell crawling down a hallway that led from a bedroom pleading with his mother, Ann Campbell, to not shoot him again.

Michael Campbell died before he could be transported to a hospital.

After shooting Michael Campbell a third time, Ann Campbell started toward Mays and said, “We don’t have to live like this anymore.”

Mays tried to exit the residence but found the front door locked. He escaped out a back door and later realized he had been shot in the thigh.

A 20-year-old Clanton man was found dead in his vehicle Jan. 6 at the Jemison Interstate Exit 219 park-and-ride.

Jemison Police Chief Shane Fulmer said Jemison police and Jemison fire and rescue responded to the call shortly after 9 p.m. of two males in a small pickup truck near the interstate exit.

Randall Lee Wells was found dead inside the car accompanied by a 40-year-old man from Maplesville who was found incoherent inside the vehicle and taken to Shelby Baptist Medical Center.

Fulmer said at the time of the incident that Wells’ father had been looking for him all day Jan. 6 and was able to track him down and locate his whereabouts by tracking his cell phone.

“The father found him dead inside the vehicle,” Fulmer said.

At the time of the incident, Fulmer said there were no obvious signs of foul play.

Thompson, 49, of Calera was killed when the 2010 Chevrolet Impala he was driving collided with a 2001 Ford Taurus driven by Jeremy Stroud, 22, of Tallassee, according to an Alabama State Troopers release.

The wreck occurred at 5:34 p.m. on Cherokee Trail Road at the intersection of Alabama 14, eight miles west of Tallassee. Stroud was not injured.

Thompson had been the principal at Southside Middle School in Tallassee since the beginning of the 2012-2013 school year.

He served as principal at JHS for four years prior to accepting the position at Southside in the summer of 2012.

JHS Assistant Principal Diane Calloway worked with Thompson all four years and recognized his efforts to do what was best for his students and community, even after he left Jemison High.

“When he left, he really had a love for Jemison,” Calloway said. “He was always one to help in any way that he possibly could. Our hearts are heavy over this loss. Our concern is for his family and their well-being at this point.”

He served as assistant principal for two years at Pelham High School before transitioning to the JHS principal position in 2008.

Members of the Clanton Kiwanis Club who sponsor the annual fair were told they would have to find a new location amid concerns in early October 2012 that a proposed airport project would extend the airport’s runway 1,500 feet to the west.

Fair organizers developed a plan to secure property near the old Henry M. Adair School located at 102 First St. S. in Clanton for the 2014 location of the fair.

The news of the one-year extension provided relief for fair organizers who were actively trying to secure a new location and make sure infrastructures were properly built to accommodate the size of the fair.

Members of the Airport Authority explained the reasoning for requiring the relocation of the fair involved complying with the FAA and ALDOT Avionics Division who require certain safety guidelines to comply with the FAA in order to continue receiving grants for the airport.

The lit-up Ferris wheel and other fair attractions were considered obstructions to the runway and did not comply with safety guidelines for the airport.

Preliminary reports from a holiday campaign encouraging Chilton County residents to “shop home for the holidays” indicate a success from... read more