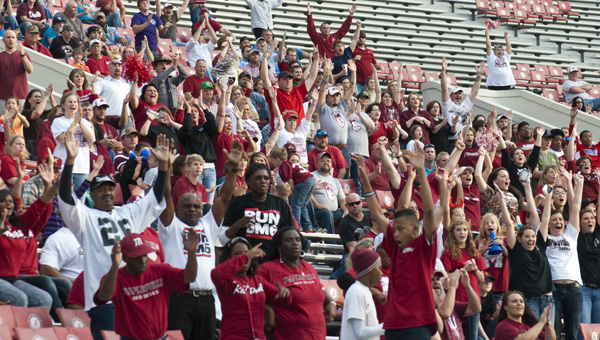 Maplesville fans cheer as the Red Devils score a touchdown against the Pickens County Tornadoes in the football Class 1A state championship Thursday at Bryant-Denny Stadium in Tuscaloosa.

Of the hundreds of Maplesville fans that attended the Class 1A state championship game Thursday, many were cheering on players in their families.

“It’s a great feeling to be here and see these guys,” Morrow said. “We just came to support our team. They’ve really worked hard ever since summer camp.”

MHS football is a tradition in Morrow’s family.

Morrow played for MHS in various positions including running back, safety and linebacker.

Both brothers played at Auburn University. Harold Morrow went on to play for the Minnesota Vikings, the Baltimore Ravens and the Arizona Cardinals.

Morrow’s son, Brandon Morrow Jr., played football for MHS until he graduated in 2012.

“Maplesville is rich in tradition of football,” Morrow said. “Football is what put us on the map, so we’re proud of the team.”

Andrews, a former MHS football player, said he had a good feeling about the Red Devils making it to the state championship this year after defeating several foes that have been roadblocks in the past.

“When they got past Linden, I knew Maplesville had a chance to make it to the Super 6,” Andrews said.

Mitchell’s parents, Ray and Mary Mitchell, were also at Thursday’s game to support their son in his senior season.

“We’re very proud of him,” Ray Mitchell said. “This is it; this is what they worked all summer for. He was very excited about coming here today to play.”

Like Morrow and Andrews, Mitchell, a former town councilman, played football at MHS.

Mitchell said the farthest his team went in post-season play was the semifinals in 1984, when Maplesville lost to Valley Head.

Although the Red Devils lost to the Tornadoes 38-18, they had and still have a fan base that’s more like family behind them.

“It’s huge for the town and the whole county,” Mitchell said of the 2013 squad’s chance to compete for its first state title since 1996. “It’s a team concept.”

The Maplesville Red Devils run out of the tunnel at Bryant-Denny Stadium before facing Pickens County in the football Class... read more