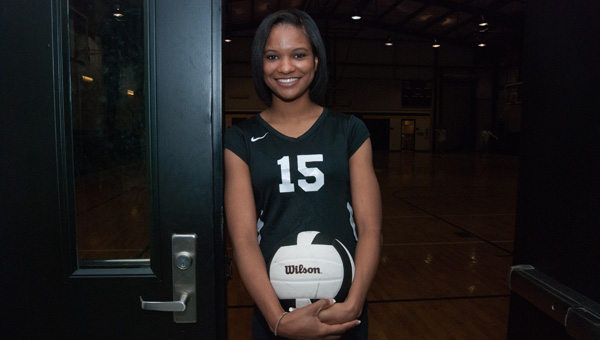 All-around star: Isabella senior outside hitter Landy Griffith recorded 237 kills, 42 blocks, 81 aces and 112 digs during the 2013 season. She was also voted by her teammates as team captain.

When Landy Griffith was a freshman at Isabella, coach Glen Graham would make the wide-eyed, skinny youngster line up across the net from then-senior Amber Wyatt, the tall, powerful star of the team who now plays for the University of South Alabama.

“I was so scared of Amber, and coach would always put me up against her to try to block her,” Griffith said.

Graham recognized Griffith’s potential, and he wanted her to have the experience early of competing against better players.

The strategy seems to have paid off, as Griffith matured into the best player on this past season’s Isabella team—and The Clanton Advertiser’s volleyball player of the year.

Griffith recorded 237 kills, 42 blocks, 81 aces and 112 digs as a senior, the culmination of a career of growing her skill set and maturity.

Griffith started as a middle blocker during her freshman season but really took off after a move to outside hitter, a position where her athleticism was better suited.

“She seemed to feel a lot more comfortable out there,” Graham said. “Outside hitters kind of set the tone for how the team is going to do.”

Griffith took on more responsibility when she was voted as the team captain before her senior season.

“I had to make sure I was 100 percent and let them know it’s not OK to slack up and not give your all,” Griffith said.

One of the highlights of Griffith’s senior season was playing alongside her cousin, Unique Robinson, a junior who was in her first year of competing with the varsity.

Though the two sometimes “bumped heads” because of their strong personalities, Griffith said she enjoyed helping make Robinson a better player—even if it was in a different way than Wyatt helped her years ago.

By Brandon Sumrall | Special to the Advertiser Both of Thorsby’s basketball teams have gotten off to hot starts to... read more