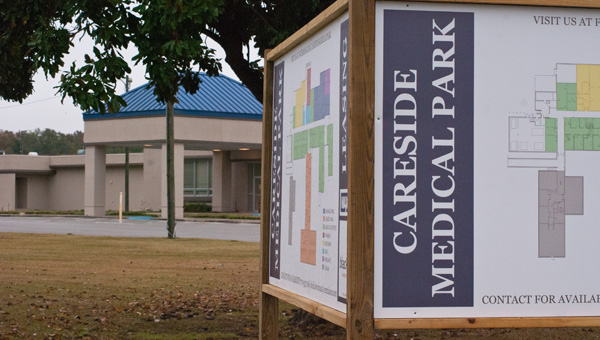 A sign out front of the former Chilton Medical Center advertises the availability of spaces to rent inside the facility.

The first phase of renovations to Chilton Medical Center could begin as soon as next week.

Chilton County’s only hospital closed about one year ago; now, its owners hope to improve the facility and create Careside Medical Park.

Plans for the medical park call for a variety of tenants including an imaging center, assisted living service, office space, a daycare, an ambulance service, a pharmacy, a restaurant and retail space.

But first, renovations must be completed to bring the structure up to code.

Gene Martin, building official/inspector for the city of Clanton, said the green light has been given to work to begin on Phase I of the renovations. There would be three phases of renovations.

Since the facility was closed, it has to meet the latest fire and energy efficiency codes before it can be re-opened, Martin said.

An updated electrical system and a sprinkler system that covers the entire building are two of the most significant projects to be completed.

“All of that comes into play when you’re looking at when you can open this place up again,” Martin said.

Cosmetic and landscaping work has already been done outside of the building, and a new 14-foot-by-8-foot sign should be erected soon, said Sheila Brockman with Central Alabama Medical Associates, the entity that owns the property.

Brockman said, ideally, the facility could have tenants and be open by April 2014.

“What we’re doing right now is working on the common areas and designing a space for an urgent care center,” Brockman said. “It’s just time consuming,” she said of the effort.

Local veterans stand as they are applauded for their military service at Verbena High School’s Veterans Day Ceremony on Friday.... read more