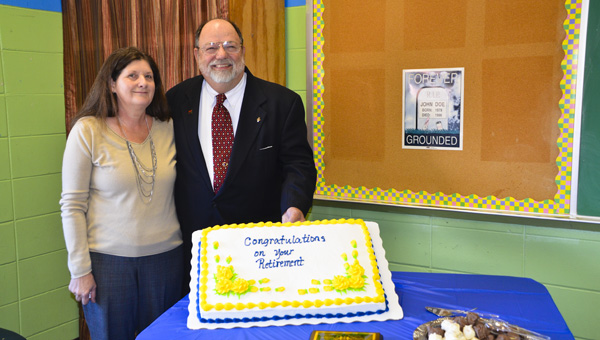 Randy Strattis, right, and wife Jeanie display his cake at his retirement party Thursday at the SPAN Program of Chilton County in Clanton.

Students and staff at the SPAN Program of Chilton County invited community members to celebrate the retirement of one of the program’s counselors on Thursday.

Randy Strattis was a longtime fixture of the program, serving as a counselor for 17 years.

“It has been a wonderful journey,” Strattis said to colleagues, family, friends and current and former students at Thursday’s gathering. “Through it all, we’ve kept our focus on the kids, and it’s been very successful. The work I’ve done here—I can leave satisfied.”

Strattis earned a bachelor’s degree in religious education from Amridge University and a master’s in counseling from Alabama State University.

Prior to working at SPAN, Strattis worked with juvenile criminals at a former facility called Jemison Ranch for Boys under the direction of Wayne and Peggy Williams of Randolph.

He pastored Lomax Church of Christ for 15 years.

Strattis said the trust many people formed with him and their willingness to open up to him about their personal lives led him to pursue a career in counseling.

“It just seemed like there was something about me—everyone just wanted to tell me their problems,” Strattis said. “I love the program. You really couldn’t do this kind of work if your heart wasn’t in it.” 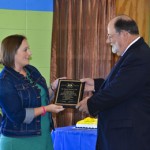 SPAN Program coordinator Amanda Hicks presents Randy Strattis with a plaque of appreciation for his service to the SPAN Program of Chilton County.

Strattis has seen the program develop through two moves and a name change.

“Chilton County is very blessed to have this program,” he said. “We have helped over 1,000 kids. Our advisory board has been a really big part of that.”

Strattis also thanked the Chilton County Board of Education and the community for supporting the program, and he recognized the students for their part in making his job worthwhile.

“You can’t work with this population of kids and not grow personally and become a better person,” he said.

Strattis said he plans to join the advisory board after taking a break.

SPAN Program coordinator Amanda Hicks said she hopes to see Strattis on the board, as well as fill his open counselor position as soon as the program gains state approval for doing so.

“He has been a great benefit to the program,” Hicks said. “His knowledge and experience has always helped other counselors when they start. He will be greatly missed, but we wish him all the best. He deserves it.”

SPAN student Martha Harrell, 14, gave Strattis a handwritten note and a hug as she passed him in the hallway Thursday.

“Mr. Randy has been there for me ever since I started coming,” Harrell said. “He’s just helped me with life problems. He’s the first person I’ve really opened up to.”

BOE member Curtis Smith said he was a state representative when Strattis started with SPAN in 1996.

“He’s done a terrific job for us,” Smith said. “I appreciate him because he’s been a friend and good person for the City Program all these years.”

Strattis’ wife, Jeanie, said he often receives feedback from former students about how much he helped them turn their lives around.

“I know he’s made a really big difference in a lot of kids’ lives,” Jeanie Strattis said.

Randy Strattis said he plans to fill his retirement with writing and setting up family enrichment seminars, possibly through local churches, focused on anger management and emotional control.

Meanwhile, his future involvement with the SPAN Advisory Board will ensure he keeps his hands on the “pulse” of the program, as he called it.

“The program’s in very good hands now,” Strattis said. “This without a doubt is the best treatment program for young people I’ve ever seen in my life.”