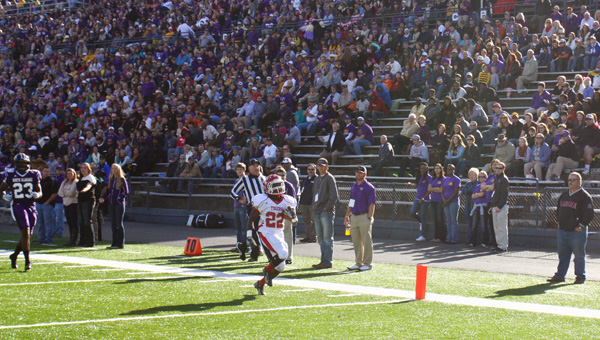 Editor’s note: Below is a compilation of the statistics and achievements compiled by graduates of Chilton County area schools who now compete at the collegiate level.

If you know of an athlete who belongs on this weekly list, email sports@clantonadvertiser.com. The Clanton Advertiser is also seeking photographs to publish with this information. If you have a photo of an athlete listed here, email a .jpg file to the address listed above.

His performance for the game thrust the 5-foot-4, 162-pounder to become the current GSC leader in rushing yards with 834 on 113 attempts to complement six touchdowns.

The sophomore did not take long to catalyze the Tigers’ offense in the matchup against the Lions, rushing for 141 yards in the opening quarter, highlighted by a 70-yard touchdown at the 6:44 mark.

The first quarter ended in a 10-10 deadlock, and UWA rallied to a 24-10 advantage by halftime following an 11-yard TD run by Kyle Caldwell and 20-yard TD pass to Chad Toocheck from Caldwell.

The second half for the Tigers was marked with struggles that included failing to capitalize points on four appearances in the red zone, while the Lions cemented a comeback to force overtime with the score at 24-24 at the end of regulation.

In the overtime period, UWA kicker Mark Grant posted a 33-yard field goal in the opening possession but UNA responded with a 4-play, 25-yard drive that was capped with by a 16-yard TD run from Luke Wingo for the win.

On Nov. 9, the Tigers will resume competition at home against Shorter (1-8, 0-5 GSC) in Livingston.

Anthony Johnson (Maplesville 2013) recorded two receptions for 12 yards as a starting wide receiver for Jacksonville State in a 42-7 triumph in Ohio Valley Conference play at Austin Peay State on Nov. 2 in Clarksville, Tenn.

The game was highlighted by JSU running back DaMarcus James, who contributed 19 carries for 102 yards and a school record five rushing touchdowns.

For the season, Johnson totals 20 catches for 244 yards and two TDs.

On Nov. 9, JSU will resume competition at home against Eastern Kentucky (6-3, 4-1 OVC) in Jacksonville.

Taylor Hughes (Chilton County 2010) completed 10-of-11 passes for 234 yards and one touchdown en route to leading Huntingdon College to a 50-20 victory in USA South Athletic Conference play at Averett on Nov. 2 in Danville, Va.

Chilton County High School held Senior Night as the Tigers hosted the Calera Eagles in the final game of the... read more