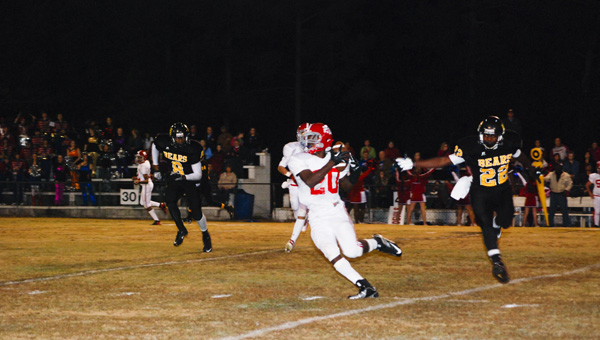 Verbena’s Hakeem Underwood fleas from Billingsley defenders in the last game of the season Friday.

The Billingsley Bears defeated county foe Verbena, 50–18, in the last game of the regular season Friday.

Thomas Nichols scored the Bears’ first touchdown of the night on a 1-yard run and then passed to Rashaud Caver for a two-point conversion, giving Billingsley an 8–0 lead with about 3:51 left in the first quarter.

The Bears struck again with a 30-yard pass from Nichols to Caver for a touchdown with 3:28 left.

Verbena scored a touchdown in the beginning of the second quarter on a 17-yard pass from Jared Mims to Juwan Tyus.

Billingsley responded with two more touchdowns—Nichols on an 8-yard run and then a pass from Nichols to Caver for 32 yards—to give the Bears a 28–6 lead at halftime.

In the third quarter, Steele scored a touchdown on a 62-yard punt return with 10:14 on the clock.

Verbena followed suit with a touchdown by Tyus on a 23-yard run with 7:20 left.

Billingsley’s Abram Dudley took his turn with a 1-yard run into the endzone.

A pass from Nichols to Hunter Neeley gave the Bears two more and a 40-point lead over the Red Devils.

Nichols completed an 18-yard pass to Keyjuan Goodson for another touchdown with 2:33 left in the third quarter, and Caver added another two points.

Mims slipped in the last touchdown of the game for the Red Devils with 11:30 left to play in the fourth quarter.

“Everybody got to play, so that’s a good thing,” Billingsley head coach Tyson McLean said afterward. “Maybe we’re building some momentum for the playoffs. Any win is a good win.”

Billingsley finished the season with an 8–2 record. Verbena was 1–9.

Even though one week of the regular season remains, the playoff fates for local high school football teams have been... read more