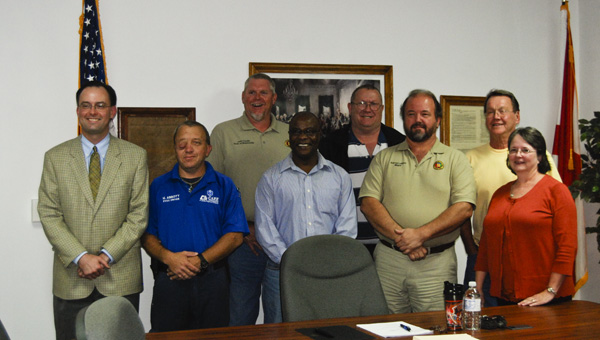 The Maplesville Town Council made several important decisions Tuesday at the outgoing members’ final meeting before the new members take office in November.

With state Rep. Kurt Wallace present, the council approved for Kenny Barrett of the street department and the new council to work with Wallace on restoring and securing the bathrooms at the town park after more than one incident of vandalism was discovered.

Barrett said the roof that had been blown off one of the dugouts during a storm was a hazard to children playing on it and needed to be removed and the roof replaced.

Except for private donations, the town is the only entity paying maintenance and repair fees at the park, which hosts peewee ball games and community gatherings.

“We’ll do what we need to do,” Wallace told the council.

Mayor Aubrey Latham said he didn’t know of any guidelines concerning the park.

The council tabled a decision on awarding a bid to replace the roof on the Brown Brothers building that would serve as a shop for Barrett to use for repairing street equipment.

Barrett said he is currently repairing equipment in a gravel lot and can only do so when it isn’t raining.

The council received four bids for the roof project, all of which included exceptions to Maplesville’s original construction plan.

Town Clerk Sheila Haigler advised council members to look over each bid and make a decision at a later date. The council approved to hold a separate meeting Oct. 9 after the canvassing of the run-off election.

Also for the street department, the council voted to purchase 23 tons of Cold Mix for about $2,400 for street repairs.

Repairs done with the mix are expected to last two years; meanwhile, the council voted to apply for an Alabama Transportation Rehabilitation and Improvement Program, or ATRIP, grant for paving the town’s truck route.

Another decision the council made was to purchase a 2008 Chevrolet Impala for the police department.

The car would be designated as the police chief’s car and would count as a replacement for when one of the department’s patrol cars is no longer useable.

In other business, the council:

•Accepted information from Wallace about the proposed amendments to the Alabama Constitution that will be on ballots statewide Nov. 2.

•Approved for the fire department to have its rescue vehicle repaired for between $250 and $400.

•Approved a new part-time officer for the police department.

•Approved moving the town’s Christmas tree to a different location to comply with state law.

•Approved the purchase of an advertisement in The Clanton Advertiser’s 2013 Progress Edition.

•Approved for the town clerk to attend a clerks’ conference in Guntersville for about $600 in conference fees and travel expenses.

At the close of the meeting, Haigler presented each council member with a certificate of appreciation and a handcrafted wooden pen made by Wayne Arnold from the Bitternut Hickory tree that was located in the backyard of Maplesville’s historic Foshee house before it fell during the Jan. 23 tornado.