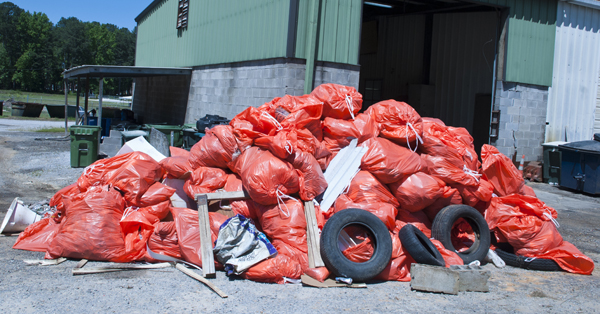 Approximately 125 bags of litter were picked up off Clanton's streets during Saturday's cleanup day.

Approximately 125 bags of litter were removed from the streets of Clanton during Saturday’s community cleanup day.

More than 260 volunteers participated in the project, which removed roadside litter across the city’s major streets and highways.

“We covered a lot of ground,” said Councilwoman Mary Mell Smith, who helped organize the cleanup.

Volunteers worked as far east as the LeCroy Career/Tech Center on Alabama 22 and as far west as Interstate 65 on Lay Dam Road. They went as far north as the Peach Tower Exit on Alabama 145 and then back down U.S. 31 into southern Clanton.

“They picked up well over 100 bags. It really did go very well,” Smith said. “This won’t be the last time that we do it.”

Smith said it’s hard to get an exact count on how many bags were picked up because volunteers in the West End community put their bags in a dumpster. City workers picked the rest of the bags up Monday.

“I think the community cleanup that we conducted this past weekend went extremely well, and we had great participation throughout the city,” said Councilman Greg DeJarnett.

A second cleanup will be planned for some time this fall, Smith said.